Danville, Va. — The marquee of a Danville, Va., church is now requesting prayers for the pastor, a Duke University divinity student who was shot last weekend while he was in the parking lot of a Durham Costco.

The incident occurred just after 1:30 p.m. on Saturday at the big box retailer located in the 1500 block of North Pointe Drive.

The victim has been identified as Ryan Ware, the pastor at Wesley Chapel United Methodist in Danville.

According to search warrants, Ware, 24, was in his SUV when he was shot in the stomach.

No arrests have been made in connection with the shooting. Police are asking anyone with information about the incident to contact them.

A grey or silver sedan was seen speeding from the scene after the shooting.

Police searched the SUV, and took a wallet and a cell phone before swabbing for DNA and gunshot residue.

According to Ware's Facebook page, he is the pastor of two churches in Virginia: one in Danville, and one in Ringgold. 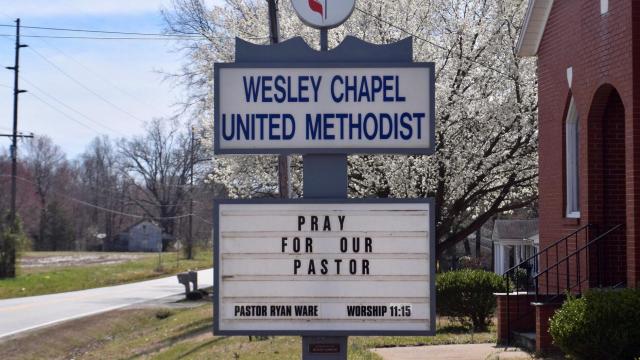 Duke University has confirmed he is also a graduate student at the Divinity School.

“The Duke Divinity School community is deeply saddened and troubled by the shooting of one of our students. We have been surrounding the victim and his family with love, support and prayers throughout the weekend, and we will continue to do so in the coming days," Duke Divinity School Dean L. Gregory Jones said Monday in a statement.

The Virginia Conference of the United Methodist Church released a statement, saying, in part, "We ask you to join us in praying for his healing and for strength for his family and friends."