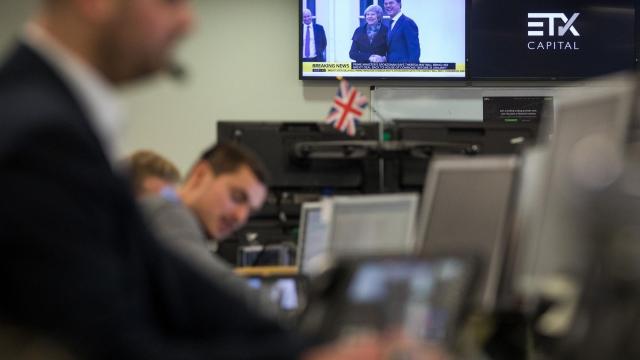 (CNN) — The British pound shrugged off a dramatic vote in the UK parliament that left the government's Brexit plans in tatters.

Parliament on Tuesday struck down the divorce deal that Prime Minister Theresa May had negotiated with the rest of the European Union by a record margin. The defeat was expected, but the size of the loss — 432 votes to 202 — was a surprise.

The pound, which had fallen below $1.27 earlier on Tuesday, erased its losses after the vote and strengthened to $1.28. Some analysts had predicted the pound would rally if May suffered a major defeat because that would raise the chance of Brexit being delayed.

The crushing loss means parliament may now wield greater control over the process. Capital Economics said lawmakers could move to delay Brexit while they work on alternatives.

"Most importantly the size of the defeat appears to reduce the chances of the United Kingdom leaving the European Union without a deal," said Paul Dales, chief UK economist at Capital Economics.

Britain is scheduled to leave the European Union at the end of March. It's unlikely that the deal negotiated by May can be substantially revised before that deadline.

Some supporters of Brexit want Britain to leave the bloc without a deal. Other potential outcomes include a second referendum or the collapse of May's government and a general election. There is increasing speculation that the whole process will be delayed.

Business groups reacted to the vote with anger.

"There are no more words to describe the frustration, impatience, and growing anger amongst business after two and a half years on a high-stakes political rollercoaster ride that shows no sign of stopping," said Adam Marshall, director general of the British Chambers of Commerce.

Companies remain worried about the potential costs of crashing out of the European Union without a deal. The chance of that happening may have decreased on Tuesday, but business remains unnerved.

Abruptly leaving the European Union without a deal in place would mean new trade barriers and an uncertain legal environment. Business lobby groups have warned that many companies are unprepared for a messy Brexit.

The US Chamber of Commerce said in a statement that a messy Brexit must be avoided, and it urged the United Kingdom and the European Union to consider extending negotiations beyond March 29 "if necessary."