Postmaster general: Delivering ballots on time 'No. 1 priority' between now and Election Day 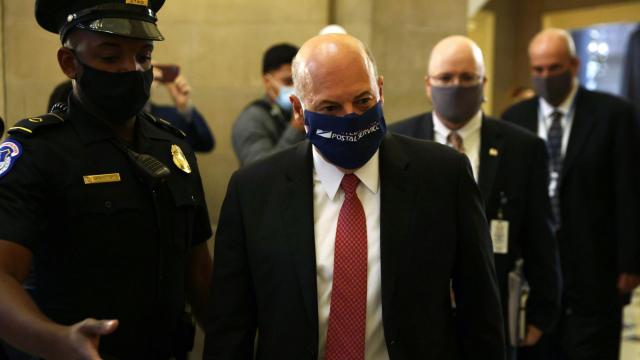 CNN — Embattled Postmaster General Louis DeJoy argued during a high-profile Senate hearing Friday that the Postal Service is up to the task of handling election mail delivery, a reassurance that comes as Democrats raise the alarm over Postal Service operations in the run-up to the presidential election.

"As we head into the election season, I want to assure this committee and the American public that the Postal Service is fully capable and committed to delivering the nation's election mail securely and on time," DeJoy told lawmakers during the hearing.

"This sacred duty is my No. 1 priority between now and Election Day," he said.

DeJoy testified before the Republican-led Senate Homeland Security and Governmental Affairs committee. The virtual hearing was the US Postal Service chief's first opportunity to publicly answer questions amid accusations that the Trump administration is deliberately sabotaging Postal Service operations through operational changes that have slowed mail delivery.

The Postmaster General acknowledged that there have been some delays, but defended implemented changes by arguing they will result in cost savings and improved service.

"We had some delays in the mail," DeJoy said, adding, "the change that I made was one to our schedule, one to our transportation schedule. I believe we will get at least a billion dollars of savings out of that moving forward and this is the key connectivity to improving our service."

DeJoy further emphasized that staffing issues associated with the pandemic have contributed to delays. "There was a slowdown in the mail when our production did not meet the schedule," he said, "but also, our employees are experiencing the Covid pandemic also and we have a significant issue in employee availability in many, many parts of the country that are leading to delays in delivering the mail."

Democrats have charged that the cuts threaten what's expected to be a surge in mail-in ballots for the November election due to the coronavirus pandemic.

But during the hearing, DeJoy said "that there has been no changes in any policies with regard to election mail for the 2020 election."

DeJoy, who has been an ally of President Donald Trump and a Republican donor, also testified that he never spoke with the President, or anyone at the White House, about Postal Service changes or their potential impact on the November election.

"I have never spoken to the President about the Postal Service other than to congratulate me when I accepted the position," he said.

Congressional Republicans have accused Democrats of unfounded concerns and unnecessary attacks on the postmaster general. During the hearing, Republican lawmakers also argued that some of the issues Democrats are focused on are longstanding and pre-date DeJoy's tenure as Postmaster general.

Senate Homeland Security Chairman Ron Johnson, a Wisconsin Republican, argued in his opening statement at the hearing that Democrats have targeted DeJoy for political gain.

"Democrats have put him in the crosshairs of another hyperbolic false narrative perpetrated to gain political advantage," Johnson said of the postmaster general.

Sen. Gary Peters of Michigan, the panel's top Democrat, said in his opening statement rebuked DeJoy, saying that he has "undermined one of our nation's most trusted institutions," adding, "the operational changes you implemented, without consulting with your customers or the public, have caused significant delays. Delays that have hurt people across the nation."

DeJoy's testimony comes after the postmaster general announced on Tuesday that controversial operational initiatives would be suspended until after the election. In making the announcement, DeJoy provided a series of assurances, including that the Postal Service "is ready today to handle whatever volume of election mail it receives this fall."

Congressional Democrats have continued to express concern, however, while arguing that DeJoy has not satisfactorily answered key questions related to Postal Service readiness and operations.

House Speaker Nancy Pelosi said on Wednesday after speaking with DeJoy that the "alleged pause is wholly insufficient and does not reverse damage already wreaked," adding, "the postmaster general frankly admitted that he had no intention of replacing the sorting machines, blue mailboxes and other key mail infrastructure that have been removed and that plans for adequate overtime, which is critical for the timely delivery of mail, are not in the works."

During Friday's hearing, DeJoy said that removed mail-sorting machines are "not needed."

Asked if he plans to bring back any mail-sorting machines that have been removed since he became Postmaster General, DeJoy responded, "There's no intention to do that. They're not needed."

DeJoy also said that 700 collection boxes have been removed since he became postmaster general.

"Since my arrival, we removed 700 collection boxes, of which I had no idea that that was a process. When I found out about it, we socialized it here with the leadership team and looked at the excitement it was creating, so I decided to stop it and we will pick it up after the election, but this is a normal process that has been around, it's been around 50 years."

Democrats have argued there is not sufficient transparency around postal service operational changes, and DeJoy pushed back when pressed to provide transcripts of non-public meetings from this year.

Democratic Sen. Jacky Rosen of Nevada said during the hearing, "We need transparency in the changes you've been making ... will you commit to providing this committee with any and all transcripts or minutes of all closed, non-public board of governor meetings from this year by this Sunday? Can you commit to that sir?"

DeJoy responded, "No," adding, "I don't know, I don't have the authority to do some of those things. And that is something that I would need to discuss with counsel and the board's counsel, so I can't commit to that."

The controversy over Postal Service operations is unfolding as Trump has repeatedly and baselessly attacked mail-in voting, falsely claiming that it is rife with fraud.

Asked during the hearing if he supports absentee voting and voting by mail, DeJoy said, "I'm going to vote by mail myself," adding, "the Postal Service will deliver every ballot and process every ballot in time that it receives."

Friday's hearing will be the first of two scheduled hearings featuring DeJoy on Capitol Hill. The postmaster general is also slated to testify before the Democrat-led House Oversight Committee on Monday.

DeJoy has acknowledged to USPS employees that the cost cutting measures have had "unintended consequences," but defended them as necessary.

Adding to concerns over operational readiness, the US Postal Service recently warned almost all 50 states and Washington, DC, that voters could be at risk of not getting their ballots back to election offices in time to be counted because election rules are not compatible with the time needed for delivery and return of absentee ballots through the mail.

Asked about the notices, DeJoy said, "This was not a change from anything we have done in previous years." He added, "It was just more detail and more emphasis put on it partly because of the expected rise in vote by mail and also because of the pandemic."

"There is slack in the system and additional processes that we will deploy in and around the election," he said.

DeJoy also said that election mail would be treated as expeditiously as possible.

"We will deploy processes and procedures that advance any election mail, in some cases ahead of first-class mail," he said.

The financial struggles of the USPS are not new, but the coronavirus pandemic has further strained the mail service.

As Democrats continue to raise concerns, the Democrat-led House is set to return on Saturday to vote on legislation that would provide $25 billion in funding for the financially strapped agency.

House Republicans have criticized Democrats over the move.

"Contrary to Democrats' claims, the Postal Service is ... properly funded for the election and beyond. It is not being 'sabotaged'," House GOP leader Kevin McCarthy wrote in a letter to House Republicans earlier this week.