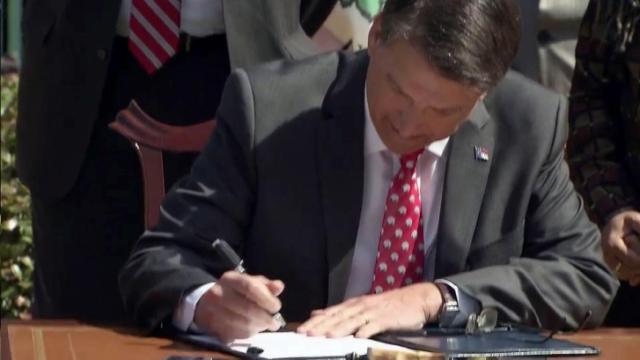 House Bill 574 is the latest legislative effort to support the annual Possum Drop on New Year's Eve in Brasstown. Animal-rights advocates have repeatedly challenged the legality of the event, leading to several court rulings against organizers and the state. Under the new law, no state or local rules apply to possums between Dec. 29 and Jan. 2 each year.

House Bill 552 creates the felony offense of graffiti vandalism for anyone who's been convicted twice previously of tagging buildings or other property.

House Bill 222 implements retention elections for Supreme Court justices in 2016. A justice who chooses a retention election would appear alone on the ballot for an up-or-down vote on whether he or she should retain a seat on the high court. If voters go against the judge, the governor would appoint someone to the court until the next statewide election, when a normal election would be held to fill the seat.

McCrory signed 12 bills on Thursday, including the following:

House Bill 340 – A bill providing that burial services shall be conducted at all state veterans cemeteries every day of the week that is not a state or federal holiday.

House Bill 346 – A bill authorizing counties to adopt ordinances to abate unreasonable restrictions of the public's right to use ocean beaches.

House Bill 691 – A bill making it a felony to commit certain types of assaults on a member of the North Carolina National Guard who is discharging or attempting to discharge official duties.