Durham, N.C. — Along University Drive in Durham Friday, the scene was familiar. A heavy rain had flooded businesses, triggering exasperation for owners all too familiar with drying out and cleaning up.

"How much longer can people put up with it? It's been 12 years – more than that," said Scott Howell, owner of Nana's restaurant, where workers reported standing water inside the main dining room, private rooms and administrative offices.

Nana's and the other businesses that share the Rockwood Building at 2514 University Drive pulled belongings to the curb Friday while they pushed water out from inside.

Nana's was open in time for dinner service, but the flooding threat is one that has yet to see a permanent solution.

"It is happening again, (and) I wish it wouldn't," said Neal Benefield, who has worked at Nana's for eight years. "There is a feeling of helplessness, that you want to be able to do more but you can't."

"We can’t not operate," Howell said. "It doesn’t work very good if we don’t bring money in."

Howell said about 75 people work in the building and depend upon it for their income. 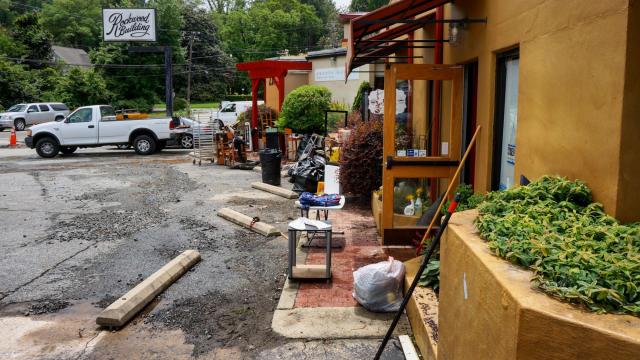 Lisa Dyer, of Dyer's Custom Tailoring, has seen enough floods to be able to at least prepare.

"Fortunately, we've been through this enough so we know to have all of our customers' clothes raised," she said.

Dyer and her husband stay in the flood-prone location to accommodate their customers.

"Our customers love this area, a lot of them live in this area, and they're our first priority," she said.

A state Department of Transportation contractor is scheduled to fix the drainage issue that causes the flooding in September.

Howell is eager for that day, although he says it comes way too late.

According to the restaurant's website, Nana's opened in December 1992 and underwent a remodeling and expansion in March 2000.