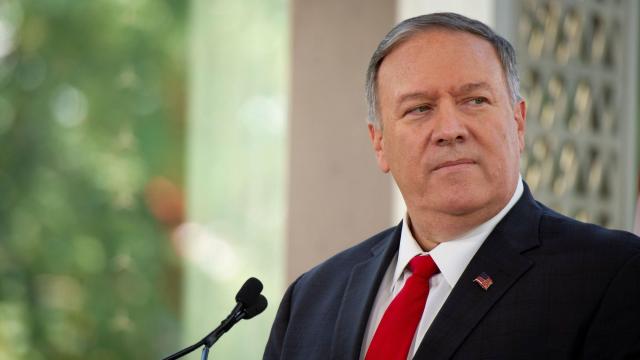 CNN — Secretary of State Mike Pompeo refused to counter a discredited conspiracy theory that Ukraine interfered in the 2016 presidential election and sidestepped a question about his willingness to testify before the House impeachment inquiry.

President Donald Trump tweeted Tuesday morning that he would "love to have Mike Pompeo, Rick Perry, Mick Mulvaney and many others testify about the phony Impeachment Hoax."

Asked about the tweet during a briefing with reporters at the State Department, Pompeo said "when the time is right all good things happen."

The top US diplomat was briefing on a range of issues, from Cuba to Afghanistan and Iran, but was also questioned on the impeachment inquiry and Ukraine.

When asked if he believes the US and Ukraine should investigate whether Ukraine interfered in the 2016 election -- a theory that US intelligence agencies say has been spread by Russia in an effort to deflect blame -- Pompeo said it was the government's "right" and "duty" to do so in every instance.

'We have a right'

"Anytime there is information that indicates that any country has messed with American elections we not only have a right, but a duty to make sure we chase that down," Pompeo said. He added that during his tenure as CIA Director "there were many countries that were actively engaged in trying to undermine American democracy, our rule of law, the fundamental understandings we have here in the United States."

In the course of his answer, he never directly mentioned the country's name or acknowledged that US intelligence has identified the Ukraine theory as a Russian disinformation effort.

Pompeo said the US would examine all allegations "whomever it is" and "whatever nation it is.""We have an obligation to make sure that the American people get to go to the ballot box and cast their ballots in a way that is unimpacted by these malevolent actors trying to undermine our western democratic values," Pompeo said.

In the past Pompeo, who was Trump's first CIA director, has said that he supports the intelligence that Russian interfered in the 2016 election. But in recent months he has also suggested -- based on no evidence -- that Joe Biden could have interfered in the election.

Pompeo has come under renewed scrutiny since Gordon Sondland, the US Ambassador to the European Union, testified before the House impeachment inquiry, squarely implicating the top US diplomat in what appear to be President Donald Trump's efforts to pressure Ukraine to investigate his political rivals.

Numerous State Department and administration officials testified before the committee that the President and his personal lawyer, Rudy Giuliani, were holding out the promise of a White House meeting and military aid in exchange for a probe into Joe Biden and a conspiracy theory that Ukraine, not Russia, was responsible for the 2016 election interference.

US intelligence agencies have identified that theory as Russian disinformation meant to deflect blame.

"Everyone was in the loop," said Sondland.

The ambassador said, "I know that members of this committee frequently frame these complicated issues in the form of a simple question: was there a quid pro quo?"

He continued: "As I testified previously ... the answer is yes."