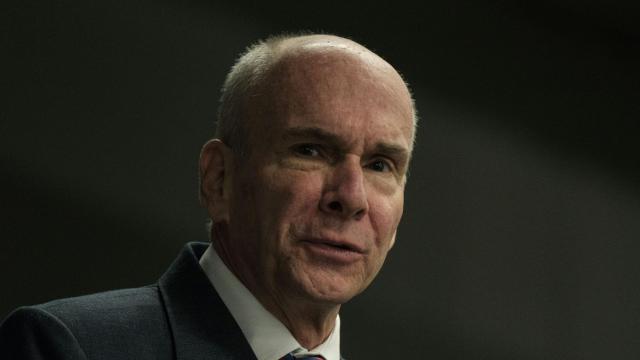 CNN — Secretary of State Mike Pompeo on Thursday contradicted for a second time sworn testimony about the former US ambassador to Ukraine who was ousted after a smear campaign led by President Donald Trump's personal lawyer, Rudy Giuliani.

But Pompeo parsed his words extremely carefully, conjuring a straw man argument in what appeared to be an attempt to undermine testimony that his former senior adviser, Michael McKinley, had given under oath before the House impeachment inquiry.

In a transcript released Tuesday, McKinley told lawmakers that starting in late September he had suggested to Pompeo three times, and at least once in person, that the State Department issue a statement of support for Marie Yovanovitch, the highly respected ambassador to Ukraine who was suddenly recalled in May.

But Pompeo has denied that McKinley ever spoke to him about a statement in support of Yovanovitch. On Oct. 20, Pompeo told ABC News he had "never" heard McKinley mention a Yovanovitch statement, "not once."

Asked again about the issue on Thursday, after McKinley's transcripts had been released, Pompeo doubled down, but parsed his words much more carefully.

McKinley "didn't raise that issue with me," Pompeo told reporters in Germany. But this time the secretary conditioned his answer on whether McKinley had raised Yovanovitch's plight in May, when she was telephoned in the middle of the night and told she had to come back to the US on the next plane for her own safety.

McKinley "wasn't involved in the Ukraine file, so it's not surprising that when Ambassador Yovanovitch returned to the United States that he didn't raise that issue with me," Pompeo said Thursday. "It shouldn't surprise anyone that in May, when that took place, he didn't say a thing to me."

Pompeo is denying the testimony of his former adviser -- a highly respected longtime diplomat -- at a time when State Department morale is plummeting over the secretary's failure to defend Yovanovich from Giuliani's smear campaign or to protect the department from being used to serve the President's political goals.

Diplomats and civil servants discussing unhappiness at the department also point to Pompeo's endorsement of Trump and Giuliani's efforts to undermine US intelligence agencies' conclusion that Russia interfered in the 2016 US election. Pompeo, a former director of the CIA, has lent credence to their theory that Ukraine is to blame and framed Moscow in the process.

McKinley made clear in his testimony that he first began urging Pompeo to issue a statement for Yovanovitch earlier this autumn.

In his testimony, the former adviser said his first conversation with Pompeo took place toward the end of September, after McKinley had been disturbed by transcripts the White House released of Trump's July 25 call with Ukrainian President Volodymyr Zelensky.

"I was disturbed by the implication that foreign governments were being approached to procure negative information on political opponents," McKinley told lawmakers. The transcript included Trump telling the Ukrainian that Yovanovitch was "going to go through some things." McKinley added that he had been upset by Trump's "negative comments on Ambassador Yovanovitch. The disparagement of a career diplomat doing her job was unacceptable to me."

"I think at that point I said, well, you know. ... I was pretty direct. I said, you know, this situation isn't acceptable," he said.

In the Oct. 20 interview with ABC, Pompeo offered a broad blanket denial that McKinley had ever approached him about a statement at any point from Yovanovitch's return in May until McKinley's resignation at the end of September.

"From the time that Ambassador Yovanovitch departed Ukraine until the time that he came to tell me that he was departing, I never heard him say a single thing about his concerns with respect to the decision that was made," Pompeo said.

Asked if he was "never asked to put out" a statement, Pompeo cut host George Stephanopoulos off and said, "Not once. Not once, George, did Ambassador McKinley say something to me during that entire time period."

During his testimony, McKinley was pressed by Republicans on whether it was possible that Pompeo's failure to respond could have been due to the fact that he hadn't "fully come to grips with how they were going to respond to this inquiry." McKinley acknowledged that was possible, but also said that "this approach ... was having a negative impact" within the State Department.

The failure to support Yovanovitch, as well as signs that the State Department was being used for the President's domestic political purposes, spurred McKinley's decision to resign, he said.

"Frankly, to see the emerging information on the engagement of our missions to procure negative political information for domestic purposes, combined with the failure I saw in the building to provide support for our professional cadre in a particularly trying time, I think the combination was a pretty good reason to decide, enough, that I had, I had no longer a useful role to play," he said.