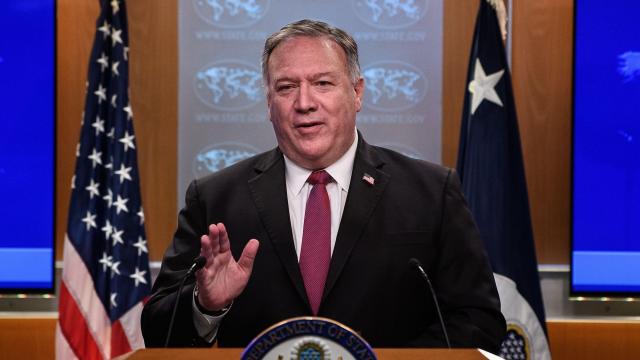 CNN — Secretary of State Mike Pompeo refused to acknowledge Joe Biden's victory as President-elect, saying at the State Department Tuesday that "there will be a smooth transition to a second Trump administration," igniting a furor and roiling diplomats.

A leading Democrat chastised the secretary for "baseless and dangerous attacks" on the results of last week's elections, while diplomats at the State Department reacted with "disgust" and anger at comments they saw as directly undermining their work to promote fair elections and peaceful democratic transitions overseas.

Pompeo was asked if the State Department is preparing to engage with the Biden transition team and, if not, whether a delay could pose a risk to national security. "The world is watching what's taking place," he continued, speaking at a briefing for reporters. "We're gonna count all the votes. When the process is completed, they'll be electors selected. There's a process, the Constitution lays it out pretty clearly."

"The world should have every confidence that the transition necessary to make sure that the State Department is functional today, successful today and successful with a president who's in office on January 20 a minute after noon, will also be successful," he said.

Pompeo's remarks added to confusion generated by President Donald Trump's refusal to concede the 2020 election and growing concern that a chaotic transition period could indeed undermine national security. Senior Republican lawmakers and other Cabinet officials have also been silent about the former vice president's projected victory.

Even as foreign leaders call to congratulate Biden, Trump has refused to accept the result, with his campaign launching legal challenges and making baseless claims about voter fraud and illegal votes. On Monday, his attorney general authorized federal prosecutors to investigate allegations of voter irregularities -- a directive that led the Justice Department's top election crimes prosecutor to resign.

Pompeo sidestepped when asked whether he believed there was massive voter fraud. He said, "I'm getting calls from all across the world. These people are watching our election. They understand that we have a legal process."

CNN has asked the State Department for clarity on Pompeo's remarks.

The top Democrat on the House Foreign Affairs Committee said in a statement Tuesday that Pompeo "shouldn't play along with baseless and dangerous attacks on the legitimacy of last week's election."

"In fact, all Administration officials should drop their false claims about electoral fraud and (the General Services Administration) should release the funding and support necessary for a smooth transition that protects our national security," Chairman Eliot Engel of New York said. "The State Department should now begin preparing for President-elect Biden's transition."

Multiple world leaders have already congratulated Biden on his victory. But the State Department has not responded to several CNN queries in the last 24 hours about what Pompeo is saying to foreign officials who call him or whether diplomats have been told how to answer questions about the outcome of the election.

US diplomats tell CNN they have received no guidance from the department and the secretary ignored a question Tuesday about that, instead ridiculed a reporter for asking whether Trump's refusal to concede undermines the State Department's advice to other countries about accepting the results of free and fair elections.

But it's a criticism that's bubbling overseas and one to which Pompeo's diplomats are acutely sensitive. After Pompeo's remarks Tuesday cast doubt on his willingness to acknowledge the election results, diplomats CNN spoke to were shocked, confused and outraged at his failure to recognize Biden's win.

"I am sick," said one US diplomat overseas. "How dare he undermine our work."

"How can he be serious?" said another US diplomat. "This is actually incredibly scary."

One State Department official said they had been watching the news conference until Pompeo "joked about the transition" and then they "flipped it off in disgust."

"For someone who created a code of ethos and a West Point graduate, he's stooping to the lowest of the low," they said, adding that Pompeo is "sinking his legacy, even with all the work and diplomacy of his term."

Diplomats are angry and confused about whether Pompeo was suggesting that they should be telling their counterparts that Trump will somehow get a second term, which they know is virtually impossible.

And yet Pompeo seemed to hold out just that possibility.

Referring to the contested 2000 presidential election that was ultimately determined by a Supreme Court decision that handed victory to Republican President George W. Bush, Pompeo also said, "They understand that this takes time, right, took us 37 plus days in an election back in 2000, conducted successful transition then."

"I'm very confident that we will count, and we must count, every legal vote. We must make sure that any vote that wasn't lawful ought not be counted. That dilutes your vote, if it's done improperly. We gotta get that right. And when we get it right, we'll get it right, we're in good shape," he said.

This story has been updated with additional reaction from State Department diplomats.