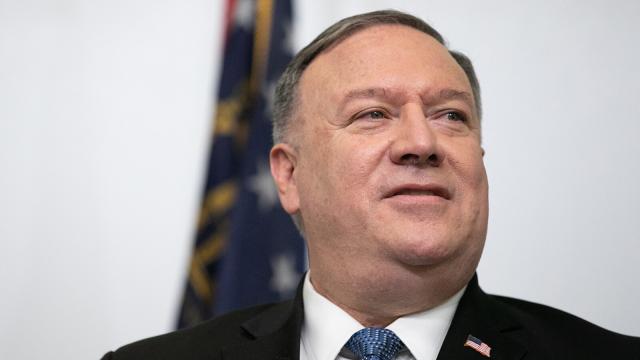 CNN — Secretary of State Mike Pompeo accused the Voice of America news service of "demeaning America" in a speech that a watchdog group criticized as "political propaganda" and a violation of the government-funded agency's own rules.

Pompeo delivered remarks in person to a command audience of VOA staff despite the Covid pandemic, urging them to report that "this is the greatest nation the world has ever known." Pompeo did not mention the pandemic, the insurrectionist violence that rocked the Capitol last week, leaving five dead, or President Donald Trump's role in encouraging the chaos.

The speech was broadcast live, worldwide, through VOA channels in more than 40 languages in what the Government Accountability Project, a group representing VOA whistleblowers, called "a violation of law, rule and policy." No questions were allowed after the remarks or the brief on-stage conversation with VOA Director Robert Reilly that followed, giving Pompeo a chance to tout Trump administration policies unchecked.

The speech deepened concerns that Michael Pack, Trump's appointee to lead the US Agency for Global Media, which controls the purse strings for VOA and other services, is intent on reducing them to government mouthpieces, a step that many say would undermine the credibility and integrity of the media operations under the USAGM umbrella.

VOA staff had been told the speech would be about "the importance of VOA and the challenges facing the United States in the world today," according to the GAP letter sent to Pack and Reilly on January 8.

The whistleblowers charged that Pompeo's appearance violated the statutory firewall that protects VOA journalists and editors from outside political meddling. "A broadcast speech by the outgoing Secretary of State on topics on which he has been widely covered should be seen for what it is: the use of VOA to disseminate political propaganda in the waning days of the Trump administration," wrote David Seide, senior counsel at the Government Accountability Project.

VOA's charter states that the agency will "be accurate, objective, and comprehensive" and that it "will represent America, not any single segment of American society, and will therefore present a balanced and comprehensive projection of significant American thought and institutions."

Pompeo had a different take on Monday, insisting that, "your mission is to promote democracy, freedom, and American values in the world." After the Berlin Wall came down, he argued that VOA "lost its commitment to its founding mission. Its broadcasts became less about telling the truth about America, and too often about demeaning America."

"It's not fake news for you to broadcast that this is the greatest nation the world has ever known. I'm not saying ignore our faults. Acknowledge them," Pompeo said. "But this isn't the 'Vice of America,' focusing on everything that's wrong with our great nation. It certainly isn't the place to give authoritarian regimes in Beijing or Tehran a platform."

Pompeo also asserted that it was "morally wrong" for VOA staff to object to his speech, using the whistleblower complaint as an excuse to launch into a culture war rant at the journalists listening to him in the auditorium.

"We are all parts of institutions with duties and responsibilities higher than any of us. And this kind of censorial instinct is dangerous. It's morally wrong. And it's against your mandate," Pompeo claimed. Minutes after seeming to suggest VOA journalists skew their coverage of the US to more positive news, Pompeo said, "censorship, wokeness, political correctness, it all points in one direction -- authoritarianism, cloaked as moral righteousness. It's similar to what we're seeing at Twitter, and Facebook, and Apple, and on too many university campuses."

David Kligerman, the general counsel at USAGM until he was allegedly forced out by Pack last month, said Pompeo's reprimands of the VOA journalists betray a fundamental misunderstanding of the agency's mission and play right into the hands of the authoritarian countries, such as China, that he criticized in his speech.

The secretary's allegations that VOA has "a culture of Censorship, wokeness, political correctness in the wake of stories which Pompeo perceives as unfavorable, is unfortunately consistent with a larger assault on the press that we have long seen by this Adminstration," Kligerman said. "It is a dangerous trope, particularly for the secretary of state, to be broadcasting into those audience in unfree countries, like China, Iran, and Russia, that we serve -- that journalists should tow the party line. It is also a fundamental misunderstanding of the mission of the Agency, as set forth in the Agency's authorization statute."

Pack, who took charge as CEO in June and is under investigation by the DC attorney general, made sweeping charges of bias against VOA employees, and conducted what some staffers called a pro-Trump "purge."

Pack's actions drew scrutiny from lawmakers from both sides of the aisle and legal actions from affected individuals. In one notable First Amendment case last month, a federal judge ruled that Pack and his team are forbidden from interfering in the newsroom.

And just last month, the federal watchdog Office of Special Counsel found what it dubbed "a substantial likelihood of wrongdoing" at the agency, and directed Pack to order an investigation.