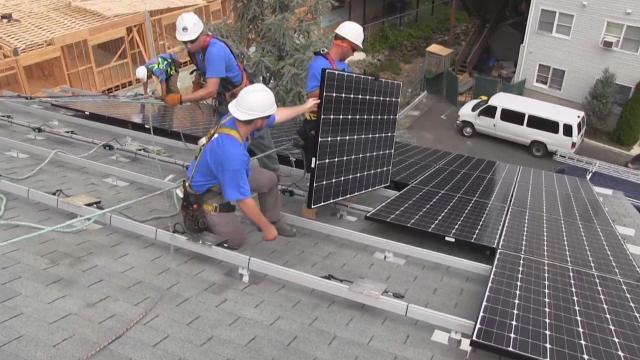 Raleigh, N.C. — State laws and policies that support development of renewable energy have been one of the hottest flashpoints inside North Carolina's legislative complex, but recent polling shows they should be an issue on which most, if not all, politicians can agree.

More than 86 percent of voters support policies that encourage the development of renewable energy in North Carolina, a poll conducted on behalf of Conservatives for Clean Energy found.

"This is a very unifying, nonpartisan issue," said Dee Stewart, a political consultant who, along with consultant Paul Shumaker, conducted and analyzed the poll for the group.

Both Stewart and Shumaker are known for working on behalf of conservative causes and candidates.

Shumaker and Stewart spoke Tuesday at the City Club to an audience comprised mainly of lawmakers and lobbyists, many of whom have been battling over the issue for the past several sessions.

"The issue is more of an issue inside the building on Jones Street than it is out in the public," Shumaker said, referring to the state Legislative Building.

But poll results showed that Republicans and Democrats of various geographic regions by and large support clean energy policies. Test questions show voters prefer candidates who support renewable energy sources such as solar over energy production modes such as nuclear and "fracking."

"This was most recently tested in my election," said Rep. Nelson Dollar, R-Wake, who attended the briefing.

Dollar squared off against Mark Villee for his Cary-based district. Villee was critical of Dollar's support for renewable energy policies. So was Americans for Prosperity, an independent group that used door hangers and phone calls to criticize Dollar.

"I was attacked for supporting an all-of-the-above energy strategy," Dollar said after the presentation, using the political shorthand for policies that encourage the growth of both renewable and fossil fuels.

Dollar easily weathered the attack. Given that two-thirds of Republicans support policies that require energy companies such as Duke Energy to expand the amount of energy they derive from renewable sources, the fact that the attack didn't land a fatal blow shouldn't be a surprise.

HB2 and the governor

It found, for example, Republican Gov. Pat McCrory leading Democrat Roy Cooper by 3 percentage points, a lead that amounts to a statistical tie. The result is somewhat notable because other recent polls have shown Cooper leading.

Despite a month of constant media coverage of House Bill 2, the measure dealing with which bathrooms transgender individuals can use, only 18 of the 800 people surveyed indicated it was the thing that made them the "most angry" about politicians in Washington, D.C., and Raleigh. More people told the poll they weren't angry or were angry about energy issues than named House Bill 2 as their top point of contention.