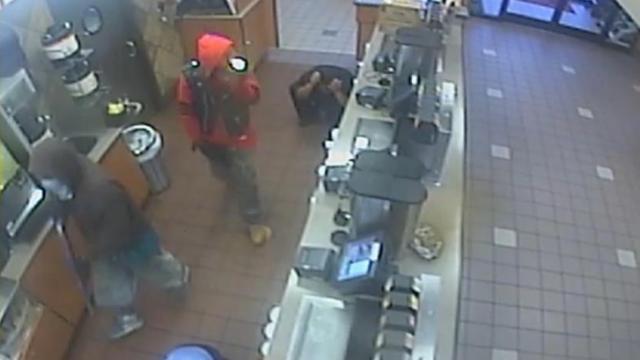 According to investigators, the two armed men entered the fast-food restaurant at about 7 a.m. They took a cash drawer and fled the area in a silver car. The car was last seen going toward Interstate 85.

Both suspects are believed to be black men.

One was wearing a brown hoodie over a dark blue shirt, light blue jean shorts, sneakers and a light blue bandana over the lower half of his face.

The second man was wearing a red hoodie over a black vest with prominent metal zippers, camouflage pants, tan boots, a red ball cap and a red bandana over his face.

Anyone with information is asked to call Durham police at 919-560-4582, ext. 29245 or Crime Stoppers at 919-683-1200. Crime Stoppers pays cash rewards for information leading to arrests in felony cases and callers never have to identify themselves.