Graham, N.C. — Police used pepper spray on a crowd of people who paused to kneel in the street during a march to the polls in Graham.

Video shows hundreds of people kneeling in a traffic circle in front of the Alamance County historic courthouse, where a large confederate statue stands.

According to a spokesperson for the City of Graham, law enforcement used a "pepper spray-based vapor," and only sprayed it onto the ground. Officials used the spray when the crowd stopped to kneel the traffic circle, which they had described as a "prohibited activity" to the organizer ahead of the event. 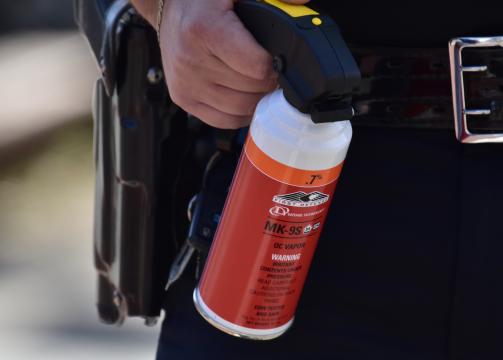 The Associated Press reports eight people were arrested. At least two Elon University students were taken into police custody, according to a statement from the university.

Law enforcement said that they commanded crowd to clear the roadway and move to the permitted area.

"When the crowd failed to disperse after several verbal commands, officers with the Graham Police Department utilized a crowd control measure that consisted of spraying a pepper based vapor onto the ground," said a City of Graham spokesperson.

But people at the scene describe a different experience. They were confused as to why they were being pepper sprayed, as police had escorted them during the march. Protesters were surprised by the use of the spray.

Gwen Frisbie-Fulton wrote on Twitter, "Moments after we were done kneeling a police officer started to yell that we had to be off the street. Folks were confused because we had been escorted there and had a permit. I moved my child up onto the sidewalk. They started pepper spraying us. My child couldn't run because he was wearing his Halloween costume."

Belle Boggs, author and director of Creative Writing at NC State University, was at the protest with her 6-year-old daughter. She said they were both pepper sprayed.

City officials said that the crowd was given an order to disperse with a five minute warning. Warnings were issued at the three-minute mark, two-minute mark, and a final warning was issued after five minutes had passed.

The warning said that if people had failed to disperse, force would be used and they would be subject to arrest.

Officials said, "At no time during this event did any member of the Graham Police Department directly spray any participant in the march with chemical irritants." 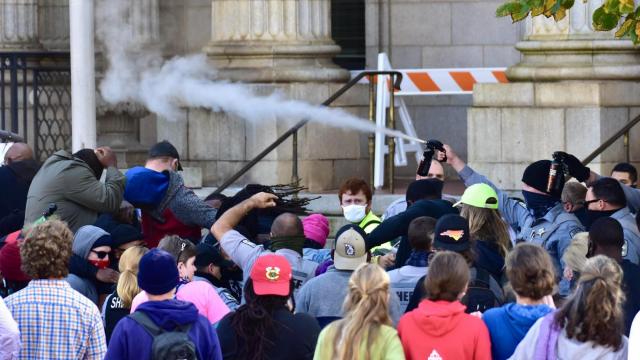 However, a photo taken by Anthony Crider, a photographer and professor at Elon University, shows a member of law enforcement spraying into the air above the crowd, as the crowd ducks to avoid it.

Gov. Roy Cooper said in a statement on Twitter: "This incident is unacceptable. Peaceful demonstrators should be able to have their voices heard and voter intimidation in any form cannot be tolerated."

The city spokesperson said they did originally have contact with the organizer, Reverend Greg Drumwright and tried to work with him to plan the event. Police said he had the opportunity to petition for a road closure, which would have possibly allowed for the gathering in the street, but he missed his deadline.

The area has been the center of controversy for years, but recent Black Lives Matter protests and counter protests have increased the tension.

Alamance County government officials said that the protest was lawful, but became unlawful when "items that were not allowed per the permit were brought on scene." 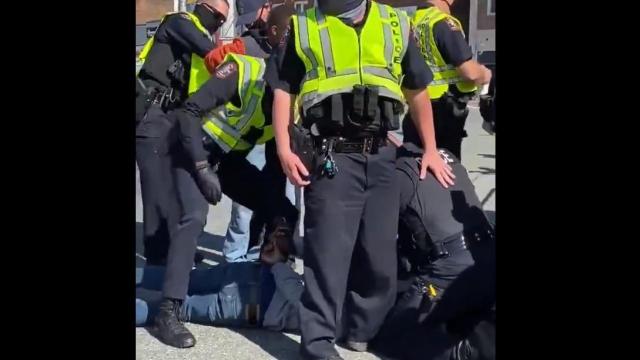 There has been official no word on what those items are.

A flyer for Saturday's protest online showed that Brooke Williams, the niece of George Floyd, was at the protest.

Attorney Ben Crump, who represents Floyd's family and the family of Breonna Taylor, was supposed to attend the protest, according to the flyer.

North Carolina Attorney General Josh Stein said that he visited Graham that evening to make sure that no voter intimation had taken place.

"All eligible voters in North Carolina have a constitutional right to cast their vote safely and securely, without threats or intimidation," Stein said on Saturday.

"After today’s troubling events in Alamance County, I went to the courthouse in Graham and all is calm now. I reached out to the State Board of Elections and was informed that the events appear not to have impacted voting at the early voting location. The site there was calm, and the voters got in line and voted. I have also reached out to the Alamance County Sheriff but have not yet connected. I will update when I learn more," he said.

Over the summer, the Sheriff's office had put a ban on protesters on courthouse grounds, steps and sidewalks. A federal judge ruled in August that the Alamance County sheriff and local officials cannot prohibit protesters near the Confederate monument on the historic courthouse grounds. 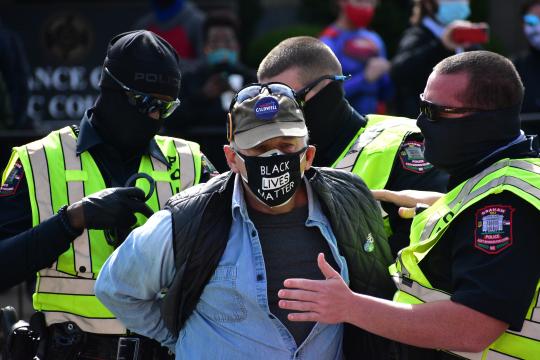 Dozens of local political, education and business leaders in Alamance County have signed on to a letter asking that the Confederate monument that stands outside the courthouse in Graham be moved.

WXII reports that the Alamance County Commissioners said under current state law the County would have to get legislative approval to relocate the statue, and it would have to be placed in an area of similar prominence. That option does not include a museum or cemetery.