BONNIEVILLE, Ky. — Friends are rallying behind a Cary military family after an Army Major and two of his children were killed during a weekend crash in Kentucky while they were moving to their new home.

Investigators have said that Augustin M. Gonzalez, 36, of Cary, was traveling south when he apparently failed to see that a tow truck had stopped partially in the travel lanes of Interstate 65 to assist a vehicle involved in an earlier crash.

Police said Gonzalez and his two daughters, Noelle, 6, and Gwendolyn, 2, were killed after the collision Saturday night in Hart County near Bonnieville.

The man's 8-year-old son, Nicholas, survived the crash, which virtually destroyed the minivan the family was riding in.

Investigators said everyone inside the vehicle was wearing a seat belt at the time of the crash.

Gonzalez, known by friends and family as "Augie," served in the United States Army and was completing his Masters degree in Public Policy at Duke University, according to a GoFundMe page set up by the family.

"Augie had just celebrated his graduation and was on his way to Fort Carson, Colorado Springs to take new orders when the unthinkable happened," the page read.

The tow truck operator was not in the truck and was not injured.

The Gonzalez family had lived in Cary for two years, but neighbors said Monday that they made fast friends with others in the neighborhood.

"He was the kind of guy who would do anything for anybody," said friend Stephen Mitchell. "And was just so patriotic and prod to be able to serve his country."

Gonzalez was moving his family to Colorado for his next assignment. 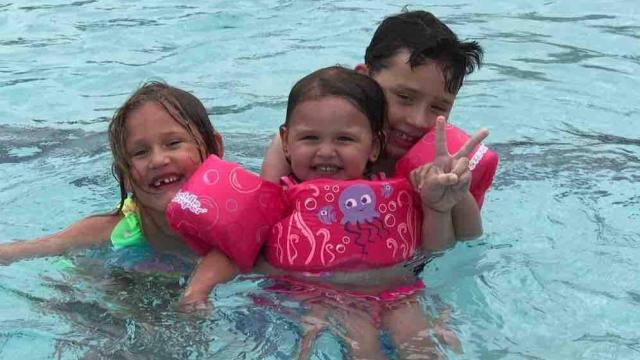 "Augie was just over the moon about his new position and new responsibilities," Mitchell said. "He had just graduated from Duke and couldn't wait to get" to Colorado.

His wife, Melissa Gonzalez, had worked as a second grade teacher at Horton's Creek Elementary School before giving birth to her youngest son. Two of the family's other children also attended the school.

While emergency crews responded to the horrific crash, Melissa Gonzalez, was on a flight to Colorado with the couple's newborn son, Gabriel.

"Because Gabriel was only 2 months old, they just thought it would be better for her to fly with him and not put everyone in the car for that long trip," Mitchell said.

Friends say Melissa Gonzalez learned about the fatal crash when she landed.

"She got to the house that they had rented in Colorado Springs and the military was waiting to give her the news," Mitchell said.

Friends and neighbors set up a GoFundMe site to provide financial support for the family as they struggle to make sense of the loss. Click here to access the online site.

Said Mitchell: "Look at everything that he has done for his country and on Memorial Day this tragedy happens. It just isn't fair."