Durham, N.C. — A third ATM theft happened in the Triangle this week, and police say that thieves used an excavator from a nearby construction site to crack the ATM open.

Security cameras shows that a Wells Fargo ATM on Park Drive, near N.C. Highway 54, in the Research Triangle Park, was hit by an excavator on Thursday.

Crews told WRAL News they found cash on the construction site on Friday.

“We were coming up the path ... there was money everywhere and they told us to go back," said Tyler Livengood, who works at the job site. 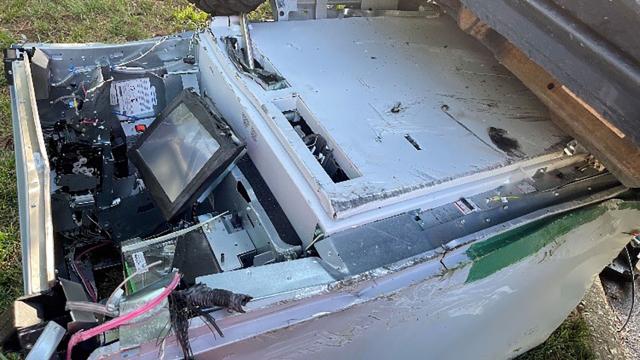 Deputies say the video of the excavator shows none of the people involved in the crime.

The Caterpillar construction vehicle can be unlocked using a universal key, police said. If someone has a key to one Caterpillar vehicle, they are able to unlock all others.

The method used to break open these ATMs appears to be the same: Thieves are using stolen vehicles and driving them into the ATMs, officials said.

Two trucks stolen in past 24 hours, used to break into ATMs

“The thing we know is common so far is that it is happening in this market and other states as well, and the commonality seems to be they are using stolen trucks," he said.

There are cameras surrounding the banks and also on the ATMs. The bank's video has been turned over to officials, but so far, no arrests have been made.