Southern Pines, N.C. — Southern Pines police responded to a 911 call from a man on Tuesday morning who said two people were shooting at him, according to Moore County Sheriff Ronnie Fields.

Officers from the Patrol Division responded to Brookside Park Apartments at around 10 a.m. They found the body of the victim, 27-year-old Tevin Barrington Spencer. He was from Eagle Springs.

From Sky 5, a large number of law enforcement could be seen gathered around the location of the shooting. A white sheet could be seen on the ground, surrounded by a group of around 25 to 50 people, many of whom looked emotional. 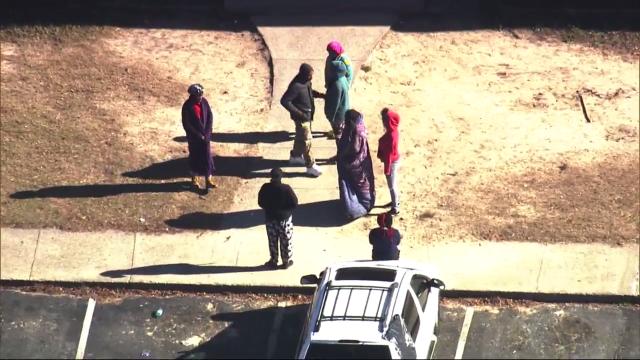 A gray passenger vehicle with the driver's side door open was presumably the caller's car, and yellow police tape was up around the area.

"This incident was not a random act of violence, and there is not an ongoing threat to the community," said the Southern Pines Police Department in a press release.

According to the release, a person of interest has been detained in the investigation. No additional details are being released at this time.

This is an active homicide investigation, and anyone with information is encouraged to contact the Southern Pines Police Department at (910) 692-7031. People may also call the anonymous tip line at (910) 693-4110.