Macron slams protesters after violence breaks out in French demonstrations 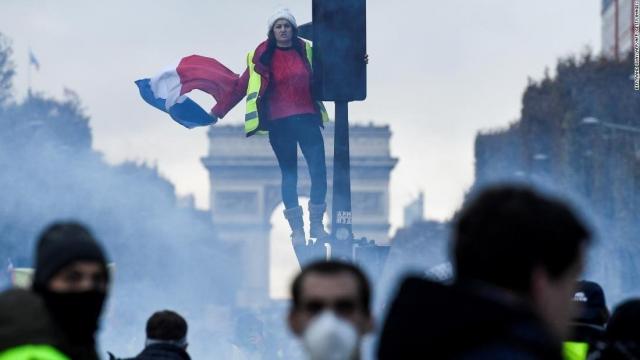 (CNN) — French President Emmanuel Macron condemned protesters who brought central Paris to a halt Saturday amid claims that the far right had infiltrated the march, which turned violent.

"Thank you to all our law enforcement, for their courage and professionalism. Shame on all the people who assaulted them," Macron tweeted. "Shame to those who voluntarily assaulted citizens and reporters. Shame on those who tried to intimidate our elected."

The demonstrations included protesters lighting fires and police using tear gas and water cannons to disperse them. One-hundred thirty people were arrested Saturday in protests across France, with 42 detained in Paris.

A protest organizer labeled the events a "civil war."

"The objective was to unite everybody here in Paris. I am disappointed because it wasn't meant to be like this," Thierry Paul Valette, one of the organizers, told CNN.

He blamed it on a "small section" of "the extreme left and the extreme right."

The "yellow vest" protests began as a campaign against rising gas prices and have morphed into a wider demonstration against Macron's government in recent weeks, spreading as far as France's Indian Ocean territory of Réunion.

Police said they have mobilized 3,000 officers in Paris to contain 8,000 protesters. A security perimeter was set up in the city center, with government buildings protected.

Far-right political leader Marine Le Pen rejected the accusations, describing them as a "pathetic and dishonest" form of "political manipulation" by the government.

Earlier Castaner said of the protesters: "Their freedom of expression will be guaranteed, but it must not be exercised to the detriment of security, public order and the right of everybody to come and go. There is no liberty without public order."

Last weekend a protester was accidentally run over and killed by a car, and more than 200 people were injured during a demonstration in eastern France.

Besides concerns over spiraling fuel prices, the protests also reflect long-running tensions between the metropolitan elite and rural poor.

The price hike is largely caused by a leap in the wholesale price of oil, with Brent crude oil -- a benchmark for worldwide oil purchases -- increasing by more than 20% in the first half of 2018 from around $60 a barrel to a peak of $86.07 in early October.

French protesters are, however, not directing their anger at OPEC for reducing oil production, or at the US administration for implementing tariffs on Iran, crippling its oil exports.

Macron is bearing the brunt of widespread French discontent, with many protesters furious at his extension of environmental policies implemented under his predecessor, François Hollande.

There is also widespread dissatisfaction over tax increases on diesel and gas.

The growing resentment has also been a springboard for partisan political attacks, with opponents of Macron's centrist En Marche party attempting to energize their bases to fuel further revolt.

Ludivine Landrin, a 32-year-old protester from near Paris, explained why she was protesting. "I'm here because I am a citizen. I want the struggle to come together. I want the French state to understand that we are here together. We want another state, we want another government," she told CNN.

"In France we have a lot of taxes. The beginning of the movement was about taxes on fuel. The movement became bigger because all the taxes are making people fed up. The Macron government is making everyone fed up -- on the right and on the left. We are all fed up with Macron and his government."

Another protester, 33-year-old Emilie, declared that a revolution was happening. "We pay our taxes, but it is only the rich who profit," she said.