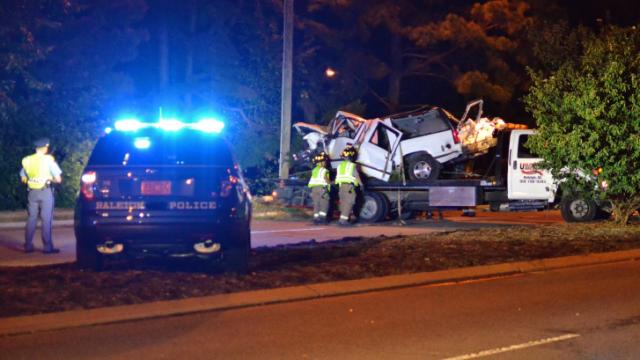 Raleigh, N.C. — The woman whose SUV crashed Monday afternoon on Creedmoor Road, killing a 12-year-old boy, was speeding and was under the influence at the time, according to a police report released Tuesday.

Laura Lynne Smith, 49, of 8617 Wellesley Way in Raleigh, lost control of her Chevrolet K1500 Suburban between Sawmill and Lynn roads, and the SUV ran off the road, hit three trees and overturned, coming to rest against a fourth tree, according to the accident report.

"They were driving very erratically before they ran off the road," said a woman who called 911 to report the crash. "I almost got hit by them."

The report indicates that the SUV was traveling at 74 mph in a 45-mph zone at the time of the crash. The report also notes that Smith had a blood-alcohol content of 0.32, which is four times the level at which a driver is considered impaired under North Carolina law.

Passenger Antony Smith died in the crash. He and Laura Lynne Smith share the same address, but there was no information in the police report to indicate how they are related.

Laura Smith was taken to WakeMed with serious but non-life threatening injuries.

She was charged with misdemeanor death by motor vehicle and exceeding a safe speed.

The accident closed the southbound lanes of Creedmoor Road for about three hours.

Monday's crash was the first fatal wreck along that stretch of Creedmoor Road in at least three years, according to state Department of Transportation statistics.

Since Sept. 1, 2011, 66 crashes have been reported on Creedmoor Road between Sawmill and Lynn Roads, including 26 involving injuries, DOT statistics show.