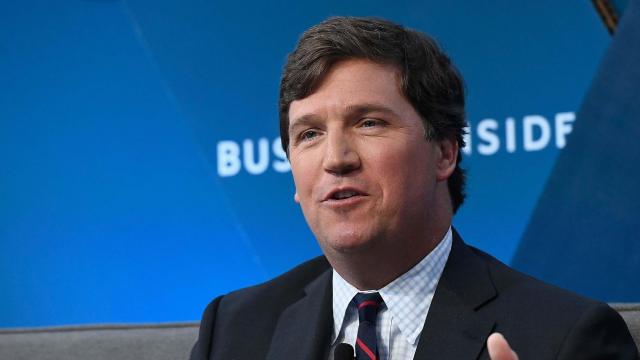 (CNN) — Police were called to the Washington, D.C. home of Fox News host Tucker Carlson on Wednesday night when a group of protesters showed up and shouted threats.

Smash Racism D.C., which calls itself an "anti-fascist," or Antifa, group, claimed responsibility for the protest on social media. It has previously targeted Ted Cruz, Kirstjen Nielsen, and other right-wing figures.

In videos uploaded to Twitter by the group on Wednesday, participants were heard saying "Tucker Carlson, we will fight! We know where you sleep at night!" They called him a "racist scumbag" and hurled epithets.

The Twitter account also shared Carlson's address, which is a violation of Twitter's rules. By late Wednesday night, Twitter had suspended the group, which means the tweets and videos are now deleted.

In a statement on Thursday, the Metropolitan Police Department said it is conducting an investigation into the disturbance.

"We welcome those who come here to exercise their First Amendment rights in a safe and peaceful manner; however, we prohibit them from breaking the law," the D.C. police said. "Last night, a group of protestors broke the law by defacing private property at a Northwest, DC residence. MPD takes these violations seriously, and we will work to hold those accountable for their unlawful actions. There is currently an open criminal investigation regarding this matter."

Earlier, Carlson told the Washington Post, "It wasn't a protest. It was a threat." He said "they were threatening me and my family and telling me to leave my own neighborhood in the city that I grew up in."

Carlson told the Post that one of the individuals "actually cracked the front door" of his home.

Carlson was at his Fox News office across town, preparing for his 8 p.m. talk show, when the disturbance occurred. His wife Susan was home alone.

According to a police report provided by the Metropolitan Police Department, Susan said "she heard loud banging and pounding on her front door."

When she went to investigate, she "saw a large group in front of her home. They had a bull horn and were chanting loudly. She retreated to a room in the rear of her home and summoned police."

When police arrived on scene, they found about 20 people, according to the police report.

There was an anarchy symbol spray painted on the driveway. "There were also signs left on the vehicles parked in the driveway as well as a sign left on the front door of the home," according to the police report.

Some of the signs were seized as evidence. The police report describes the incident as a "suspected hate crime" and says the motivation was "anti-political."

Carlson, one of the top hosts on Fox, is a top target of progressive critics. They say Carlson supports white supremacy through his commentaries and programming choices -- a charge he flatly denies.

"The incident that took place at Tucker's home last night was reprehensible," Fox News CEO Suzanne Scott and president Jay Wallace said in a statement on Thursday. "The violent threats and intimidation tactics toward him and his family are completely unacceptable."

"We as a nation have become far too intolerant of different points of view," the executives said. "Recent events across our country clearly highlight the need for a more civil, respectful, and inclusive national conversation. Those of us in the media and in politics bear a special obligation to all Americans, to find common ground."

"Late Show" host Stephen Colbert weighed in as well, saying "Fighting Tucker Carlson's ideas is an American right. Targeting his home and terrorizing his family is an act of monstrous cowardice. Obviously don't do this, but also, take no pleasure in it happening. Feeding monsters just makes more monsters."

One of the leaders of Media Matters, a liberal media monitoring group that opposes Fox, also condemned the incident.

"This behavior is way over the line," senior fellow Matthew Gertz tweeted. "Going to someone's home, breaking their door, and terrorizing their family is unacceptable. It's also extremely counterproductive if your interest is actually in reducing his influence."

Max Boot, a conservative columnist and CNN commentator, said he agreed with Gertz.

"I think Tucker is a terrible influence on modern America but that doesn't justify harassing him at home," Boot tweeted. "Go high, not low."