The question before the Supreme Court is who polices the police 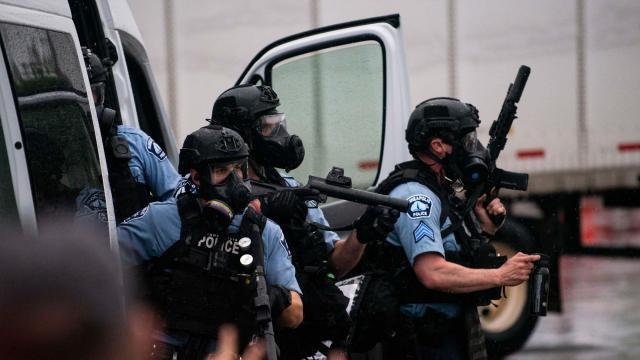 CNN — The protests and clashes unfolding across the country in response to the killing of George Floyd have upheld a resonant message for courts to consider: Law enforcement accountability is missing in the justice system.

The Supreme Court could decide soon whether it will take a closer look at a legal doctrine it created nearly 40 years ago that critics say is shielding law enforcement and government officials from accountability. Defenders argue that it protects an officer's ability to make a snap decision during potentially dangerous situations.

In recent years, legal scholars, judges and justices on all sides of the ideological spectrum have criticized the legal doctrine known as "qualified immunity," arguing that it is not grounded in the proper legal authorities and too often shields officials from accountability.

"When the Supreme Court grants qualified immunity ... it sends a message to law enforcement that there are not consequences for violating the law and it sends the message to the people that their rights don't matter," UCLA law professor Joanna Schwartz said.

Under the doctrine, an officer will not be liable even if he violated the Constitution unless it was "clearly established" by prior cases that his conduct was unconstitutional.

That requires a high bar and makes it difficult to win unless the situation is similar to a prior case with nearly identical facts. In some cases with unique fact patterns, of which there are many, officers have been granted immunity even if they have been found to have acted in violation of the Constitution.

The cases before the court involving excessive force by the police have never been more relevant.

"Everyone has the potential for adverse encounters with state actors, whether it's members of law enforcement, public school officials, city council members, or other municipal employees," said Jay Schweikert, a policy analyst at the Cato Institute. "So long as the Supreme Court continues to permit this unlawful shield for government agents, no citizen will have any assurance that their rights will be respected."

Derek Chauvin, the former Minneapolis Police officer who pressed his knee into George Floyd's neck for nearly nine minutes, was charged with second-degree murder and the three other officers -- Thomas Lane and J. Alexander Kueng, who helped restrain Floyd, and Tou Thao, who stood near the others on scene during his killing -- were charged with aiding and abetting, according to court documents.

In 2017, Justice Clarence Thomas urged the court to reconsider the doctrine.

"Until we shift the focus of our inquiry to whether immunity existed at common law, we will continue to substitute our own policy preferences for the mandates of Congress," the conservative Thomas wrote in a concurring opinion. "In an appropriate case, we should reconsider our qualified immunity jurisprudence."

In a different 2017 case, the court granted an Arizona police officer qualified immunity in a case involving excessive use of force. Liberal Justice Sonia Sotomayor wrote in a stinging dissent that the opinion allowed police officers to "shoot first and think later."

CNN legal analyst and former federal prosecutor Laura Coates said "there has been an existing urgency" for the court to reevaluate its position.

"There has actually been a number of cases that should have prompted the court to reassess qualified immunity, which really is a concept they created, and now have an even bigger obligation to clarify so that qualified immunity is not transformed irrevocably into murder with impunity," Coates said.

The doctrine was originally intended to protect government officers from financially frivolous lawsuits, allowing them a broad amount of discretion.

The case that ushered in qualified immunity precedent begins with the whistleblower testimony to Congress of Air Force contractor A. Ernest Fitzgerald, who alleged that a new fleet of aircraft had gone $2 billion over budget.

Fitzgerald was fired from his position in 1970, and uncovered tapes from President Richard Nixon showed that the 37th president personally ordered the firing. In a conversation with aide Charles W. Colson, Nixon said as much: "That's how that happened. I said get rid of that son of a bitch."

Fitzgerald filed suit against Nixon and other government officials alleging the connection between his testimony and his termination. While Nixon was found to have presidential immunity in a separate case, the question the court was forced to decide was about the president's aides.

In its 1982 decision, the court found that the aides were entitled to qualified immunity. "Government officials performing discretionary functions, generally are shielded from liability for civil damages insofar as their conduct does not violate clearly established statutory or constitutional rights of which a reasonable person would have known," the court ruled.

Though the Fitzgerald decision was handed down in relation to White House aides, it has far-reaching implications for other officers of the law, such as police officers. As things stand, a public official who violates someone's constitutional rights can be sued only with a showing that the official violated "clearly established law."

Across the ideological spectrum, critics say that the courts that have developed the doctrine over the years have gone astray.

"The principle that government officials should be accountable for their violations of the Constitution is not a partisan issue. It's an American one," Boston University law professor Jack Beermann said in an interview with CNN. "Conservatives are just as concerned with abuse of government power as liberals are. And you combine that with what seems to be a rash of police misconduct in recent years and you can get a pretty strong coalition."

Scott Michelman, legal director of the American Civil Liberties Union, agrees there's an immediate need for the Supreme Court to address the issue.

"There's an incredible urgency as communities across the country seek accountability for police violence against individuals of color in particularly, to open up the courts, claim a constitutional violation and make sure officers aren't provided a get-out-of-court-free card when they violate people's rights," Michelman said.

"We are in the midst of a crisis of accountability in law enforcement, which means there's an urgent need for the court to address qualified immunity," Schweikert said. "As George Floyd's death tragically illustrates, for many people in this country, our culture of near-zero accountability for law enforcement is not an abstract public-policy concern, but a matter of life and death."

"Qualified immunity was created by the Supreme Court in contravention of the text of the statute and the intent of Congress. It is time for us to correct their mistake," Amash wrote in a letter to colleagues.

In many of the cases that the justices could choose from for the next term, proponents of the qualified immunity doctrine have said it protects police officers in a necessary way.

"At its heart, qualified immunity protects police officers' split second decisions ... courts must afford them a measure of deference in their on-the-scene assessments about the application of force to subdue a fleeing or resisting suspect," the lawyers for Tennessee police officer Alexander Bracey wrote in a court brief.

In Corbitt v. Vickers, a case in which Georgia deputy Michael Vickers tried to shoot a family dog but instead hit a 10-year-old boy lying on the ground, lawyers for the officer made a similar case.

"Abandoning qualified immunity ... would leave hundreds of thousands of law enforcement officers exposed to potential liability, likely second guessing themselves in situations where a hesitation to act could mean the difference between life and death," the lawyers said in court papers.

Cases justices could take up next term

Alex Baxter was a homeless man who was being pursued by Nashville police on a cold winter night about five years ago on suspicion that he had been breaking into homes. Officers chased him into a basement of a home and released a dog to look for him. The dog found him, the police were present and officers were on either side of Baxter. The officer corralled the dog, and Baxter put his hands up.

According to court papers, police officer Spencer Harris released the police dog to attack Baxter, who sustained an injury that brought him to the hospital. Brad Bracey, the other officer on the scene, failed to intervene in the attack.

When the lower courts handed down their opinion on Baxter, they granted qualified immunity to the police officer because given the unique fact pattern of the case, they were unable to determine that the law did not violate "clearly established law."

"Even if Baxter raised his hands, the other circumstances ... weigh against a finding that 'every reasonable official would understand that what [Harris did] is unlawful.' For that reason, Harris is entitled to qualified immunity," the appeals court opinion reads.

"Our case presents some of the problems with qualified immunity very starkly," said Michelman, lead counsel representing Baxter in the case. "Everyone should know, and everyone does know, that putting your hands up is a universal symbol of surrender and it is completely out of bounds to attack somebody who has surrendered."

There are a handful of cases the justices could choose from dealing with claims of excessive use of force and unlawful search and seizure. The cases range from a petition from a doctor who said police illegally raided his office and patient files to a family of a hypothermia victim who they say should have been revived.

Paul Hughes, a lawyer behind Corbitt v. Vickers and the medical search and seizure case, says that while the cases involving police accountability draw attention to claims of excessive force, all too often other cases, with less horrific outcomes, fly under the radar.

"These cases very frequently arrive from police use of force in particular circumstances," Hughes said. "When an individual or his or her estate alleges that a police officer used excessive force the officer will invariably raise a qualified immunity defense."

His case concerns Dr. Joseph Zadeh, who owns and operates a medical practice in a suburb of Dallas. Zadeh was under investigation by the Drug Enforcement Administration for drug prescribing activities, and was served a subpoena for medical records of his patients. Without his direct permission the DEA spent several hours copying his records, until Zadeh's lawyers arrived and asked the agency to stop. His lawyers later sought to sue, arguing that the DEA had violated his Fourth Amendment Rights and those of one of his patients, referred to as "Jane Doe."

Lower courts dismissed the petition, but the Supreme Court could choose to take another look.