Poking Fun at Fashion, Onstage and in Song 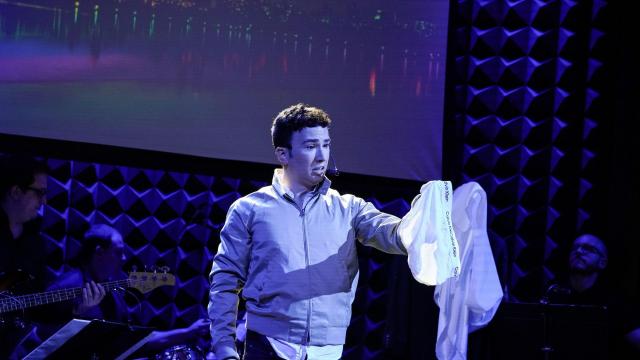 NEW YORK — Fashion — that big, amorphous blob of style pronouncements and product that occupies an outsize space in the psychographic map of the world — is good at many things, but laughing at itself is not necessarily one of them.

Remember how unamused YSL (the brand) was at the satirical “Ain’t Laurent Without Yves” T-shirt in 2015? Reportedly unamused enough to threaten to end its relationships with stores that sold them.

So it’s relatively brave for a lone, young, celeb bio-musical creator and star to take on not one, but three of fashion’s most sacred cows. At once. That’s exactly what Ryan Raftery is doing in “The Obsession of Calvin Klein,” which had its opening at Joe’s Pub in the Public Theater in New York on Sunday night and runs until Nov. 17.

And my guess is, the subjects — Calvin Klein, Ralph Lauren and Donna Karan — will hate it. But they shouldn’t. (Well, maybe Donna should; it’s not too flattering about her.) Because under all the mockery, and there’s quite a lot of it, some friendly, some less so, it gets one thing about fashion very right.

The show, which stars Raftery as Klein, used the frame of a career talk at the Harvard Graduate School of Design to take him down memory lane, back to the neighborhood in the Bronx where both he and Lauren grew up, thus setting up a story of competition, jealousy and success à la “Black Swan.” It is set to tunes from Amy Winehouse, Fleetwood Mac, “Chicago” and “Pal Joey,” among others, (the lyrics changed to fit the theme) and is actually Raftery’s second foray into the style set.

His first — the show that brought him a new level of attention after time on the underground cabaret circuit — was “Ryan Raftery is the Most Powerful Woman in Fashion,” aka the Anna Wintour story, which he wrote while working in the public relations department of Coach.

Then he took on both Martha Stewart and Andy Cohen, but the “Calvin” show brings things full circle.

Raftery is not, it is fair to say, out for historical accuracy; his poetic license is pretty extreme. Though he said in an email exchange that his starting point was wanting people who knew the Calvin Klein brand to realize there was a real person behind it, (and though he actually spent a day as the real Calvin’s assistant, before realizing “he needed someone willing to make a very serious commitment to the job”), reality doesn’t much come into the show.

While the general timeline of Klein’s career is accurate, Raftery has reimagined Karan (played by Jess Watkins) as a cleaning lady/pawn who gets Svengalied by Klein into becoming a designer, to distract Lauren (Miranda Noelle Wilson) with competition, thus enabling Klein to build the bigger empire. In this version of the story, it’s Klein’s idea to send Karan to Haiti, not for humanitarian reasons, but to get a voodoo charm to hex Lauren.

None of that is true, of course, though the show does correctly get her penchant for swathing herself in black, and her view of yoga as a panacea for many ills. Also, the fact she and Klein are good friends.

Raftery is a little fairer to Lauren and Klein, though not much. But he’s a charismatic presence, the songs are great (his version of “Back to Black,” switching the words to “I Go Right to White,” an ode to monochromatic allure, is particularly catchy). It’s often genuinely funny, if occasionally wincing, and the point of the show, which might be the most important thing of all, is real: the intense stakes of having to be creative on a schedule, and the way it can make you crazy.

In the show, it actually does make both Klein and Lauren kind of nuts. Which is not that far from the internal narrative that fashion tends to tell itself about many of its favorite sons and daughters.

It’s kind of like a cabaret version of “Phantom Thread,” but a lot less pretentious. If Calvin and Co. were really smart, they would embrace the show, adopt Raftery as a mascot and have him guest-star at a fundraiser.

After all, nothing makes you look smarter or more secure than being able to laugh at yourself.

According to Raftery: “Many people told me to focus my attention on the current White House, but I have to spend so much time thinking about my subjects, I don’t think I could stand it. I might lose my mind.”

So imagine instead a whole series on fashion characters, inadvertently presenting the industry with that much-desired thing: content and a sense of humor. One of the issues with fashion satire is that the starting point is already so extreme, it can never quite go far enough, but this is not Raftery’s problem.

Just think of what he could do with, say, Karl Lagerfeld. Or Giorgio Armani. Or Dolce & Gabbana. The Gucci scandal! Hedi Slimane. The mind boggles.