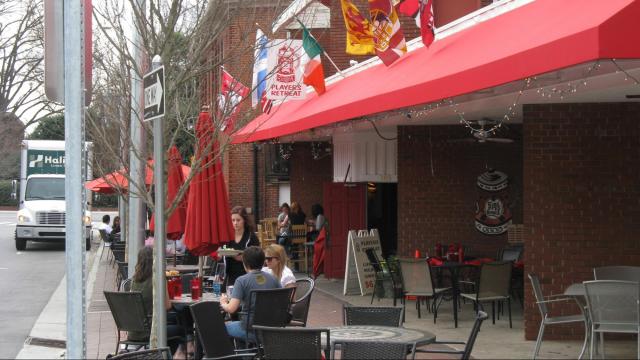 "My wife would sit in here and she would never order the pizza even though I was cooking it. I wouldn’t eat the pizza and I was cooking it," Gusler said, sitting in a back booth at Raleigh's oldest standing bar.

What made the pizza so terrible? The pre-frozen cardboard crust, Gusler says.

The Players Retreat is celebrating its 69th year in business. For the past 14 years, Gusler has been the owner, while simultaneously practicing law.

Gusler first walked through doors at the PR in 1967 as a freshman. "It was my place to come and drink beer," he said.

"One of the things that struck me was the inclusivity of the place," he said, referencing the mix of all races and sexualities there. "Everybody got along and there were never any problems there."

That's because Players' Retreat has had a policy since it is opened - "You start something, you don't get a second chance," Gusler said.

"They (the owners) realized that with the mixture of people that are in here, they had to have strict rules about problems," he said.

You take a swing, you are banned from setting foot back inside the sports bar.

And there is also strict rules about language. If you use a derogatory term for anyone you are permanently banned.

Gusler had left his days as a pizza cook behind and gone into law when he ended up buying Players' Retreat in 2005. At the time, the PR was in danger of closing.

Gusler had his hands full at the time, serving as the lawyer for the band Hootie and the Blowfish at the height of their fame. Although he still is their lawyer today, Gusler almost never represented the band at all.

After representing several bands in the past, Gusler had stopped representing musicians as most weren't interested in the business side of the industry.

An old friend was managing the group at the time and had called Gusler three times in an effort to get him to represent the band. Each time, Gusler said no. The fourth call was from a payphone downstairs from Gusler's office.

"They cared about the business and they understood there was a business side, I've been with them ever since," Gusler said. "They are still four of my best friends in the world."

Hear more from Gusler on this week's WRAL Out and About Podcast.