Raleigh, N.C. — Developers are planning to invest $300 million to revamp the Seaboard Station neighborhood on the north edge of downtown Raleigh.

The expansion will feature more than 600 residences and roughly 130,000 square feet of retail space.

“We are excited to honor the legacy of this historic location with a design that will contribute to this vibrant community, making it a destination for downtown Raleigh, surrounding neighborhoods and the region,” said John Florian, Hoffman’s executive vice president of development.

“Seaboard Station will be an expanded urban neighborhood that seamlessly fits with the existing landscape, featuring unique retailers, local chef-driven restaurants, and entertainment concepts in an engaging community,” he said.

Construction is set to commence this fall. 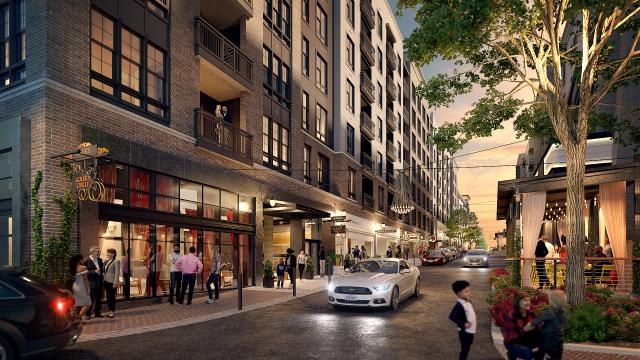 Phase 1 will include nearly 300 apartment residences and some 30,000 square feet of retail space.

The Seaboard train station originally opened in 1942 as a train depot and warehouse buildings, serving travelers until 1986. It sat abandoned until the Logan family purchased and restored the property. That station became Logan’s Trading Co., which sits there today and will continue to operate as it has for 55 years, a company spokesman said.

After Logan's updated the station, other old warehouses nearby were restored in the early 2000s, becoming known as Shops at Seaboard Station.

William Peace University purchased Shops at Seaboard Station in 2013, and later sold it on to Hoffman & Associates in 2018.

Hoffman & Associates has developed high-end, mixed-use and residential buildings throughout Washington, D.C., including a $2.5 billion waterfront development south of the National Mall known as the Wharf.

This is the company's first project outside of D.C.

“We look forward to creating an inclusive community-focused development that delivers value for Raleigh and brings people together to live, shop, dine, work, explore and connect,” said Florian.