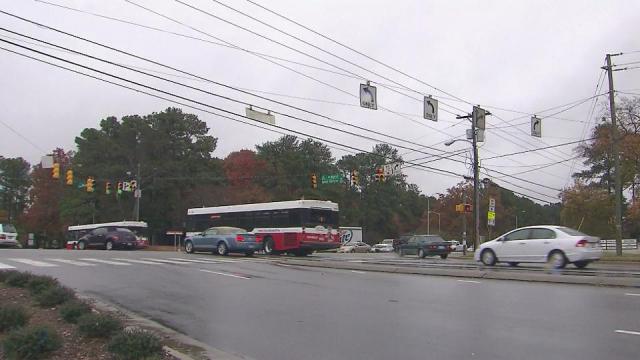 Now, campus officials are asking state transportation planners to consider building a pedestrian bridge or tunnel across the corridor, which bisects the campus, housing and shopping.

“I think a lot of people don't realize they're supposed to yield to the pedestrians,” N.C. State senior Parker Johnson said. “Sometimes it's quite scary.”

The busy intersection is complex for both pedestrians and motorists. Once those on foot get the “walk” signal, they must cross two through-lanes and a couple of turn lanes. Then they typically wait at a traffic island in the center of Western Boulevard, hit a button and wait for the signal to cross the other half of the road.

“It’s a lot of lanes to cross,” Johnson said. “Standing there in the middle, sometimes traffic's coming by at 55 mph.”

Brian O’Sullivan, transportation planner for the university, said a tunnel or pedestrian bridge could be a safe solution.

“It’s a busy place, and I don't see it ever changing,” O’Sullivan said. “As Centennial Campus grows, as apartment units grow down at the Avent Ferry complex, there's going to be a lot more movement of people.”

Many students said they would welcome anything that would make the trip across Western Boulevard less dicey.

O'Sullivan says planners are studying many possibilities as part of an overall look at Western Boulevard between Pullen Park Drive and Gorman Street. Learn more about the project online.