Plan to Avoid Shutdown, If President Goes Along 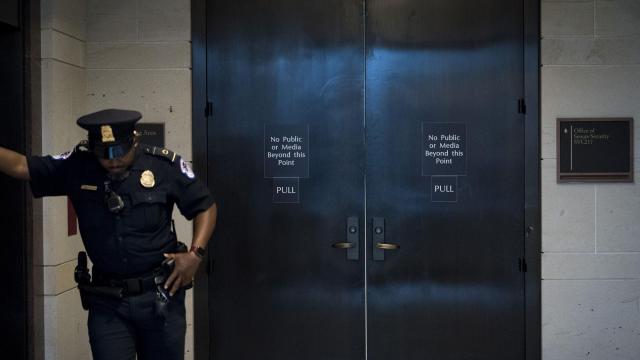 WASHINGTON — Only days before much of the government is set to run out of money, Congress is moving to send a spending bill to President Donald Trump to fund the military and keep the government open — without funding his cherished wall on the southwestern border.

In effect, Republican leaders are betting Trump will swallow yet another defeat for his promised wall to avoid vetoing a $20 billion increase in military spending.

With the Sept. 30 deadline approaching, it is not yet clear whether Trump will sign the measure. Neither Republicans nor Democrats want the government to close before the midterm elections, but the president has repeatedly raised the specter of a shutdown, most recently last week when he criticized the stopgap spending bill as “ridiculous” and chastised Democrats for pushing an agenda he deemed soft on security.

“Where is the money for Border Security and the WALL in this ridiculous Spending Bill,” he asked on Twitter. “REPUBLICANS MUST FINALLY GET TOUGH!”

A short-term measure, approved by the Senate and awaiting action this week in the House, is attached to a larger, yearlong spending bill that increases the Pentagon’s budget by nearly $20 billion and provides funding to the departments of Labor, Education and Health and Human Services. By allowing Trump to claim a win on military spending, legislators hope to avert a veto.

Congressional Republicans, acutely aware they could be in for bruising midterms, are convinced that a shutdown before the November elections would be politically calamitous and have sought to persuade the president to push that battle to December. Even some of the president’s hard-line immigration allies, including the Freedom Caucus chairman, Rep. Mark Meadows, R-N.C., agreed. Meadows said this month it would be “more prudent” to debate border security after the midterms.

A shutdown is “not in anyone’s interest, and he knows that,” Speaker Paul Ryan of Wisconsin said of Trump.

Rep. Michael McCaul, R-Texas, a sponsor of a border security act that would provide $15 billion to build a wall, said he “shared the president’s frustration” that the legislation did not pass, but he emphasized the importance of authorizing increased funds for the armed forces.

“A shutdown would not be productive right now,” McCaul, the chairman of the Homeland Security Committee, said Tuesday.

In addition to increasing Pentagon funding, the bill continues funding increases for the National Institutes of Health and the Department of Education by $2 billion each, and provides $3.8 billion to fight the opioid epidemic.

After Trump told legislators last year that he would never again sign a sprawling omnibus bill, Congress has approached the appropriations process the old-fashioned way, with the Senate passing a series of agency-specific spending bills and sending them into negotiations with the House, rather than passing huge omnibus bills that lump the spending measures together.

“We have steadily consolidated critical mass for a return to regular order in the appropriations process,” Shelby said in a speech on the floor.

All told, Congress will have taken action on nine of 12 spending bills accounting for more than 90 percent of all discretionary spending.

Trump signed a spending package on Friday ensuring funding for the Department of Veterans Affairs, the Department of Energy, military construction projects and congressional operations through the fiscal year that begins Oct. 1. The package contains $1.25 billion more than the White House requested to bolster funding for health care for veterans, as well as $1 million to expand security protection afforded to members of Congress at events outside the Capitol, following last year’s shooting at a congressional baseball practice in Virginia.

The stopgap spending bill would fund the departments of Interior, Treasury, Agriculture, Transportation and Housing and Urban Development, as well as the Environmental Protection Agency, into December while lawmakers work on a longer-term bill.