Raleigh, N.C. — With the placement of a 160-ton dome, the outline of Holy Name of Jesus cathedral in Raleigh came into focus.

The dome marks a major milestone in the construction of the cathedral, the future home eastern North Carolina Catholics.

A special crane, built on site, lifted the steel-and-copper structure into place beginning around 8 a.m.

"Dome comes from the Latin 'domus,' which means 'home,'" said Billy Atwell, communication director for the diocese. "The cathedral is the spiritual home for Catholics throughout North Carolina, and the placement of this dome on top is sort of a symbol for us and a reminder of what it is we're actually building here."

Raising the dome from the ground and lowering it onto the cathedral frame took about an hour. Securing it to the building was expected to take the rest of the day, Atwell said. For a structure built to last 300 years, that is but a drop in the bucket.

"We've never built anything like this. As you could imagine, it's a once in a lifetime opportunity for us to be able to provide this but also be able to witness it," Atwell said.

By fall of 2017, the cathedral will be open and serving an estimated 2,000 worshippers at a time. The Holy Name of Jesus Cathedral is an upgrade for North Carolina Catholics over the current Sacred Heart Cathedral in downtown Raleigh.

The smallest Catholic cathedral in the United States, Sacred Heart's 320 seats require 11 Masses each weekend to accommodate all comers. 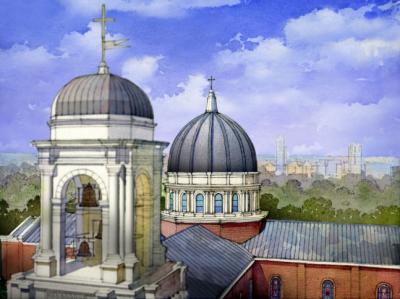 "The ability to bring everybody under one roof, or at least as many as possible, is really important, and it reflects the growth of the diocese that we've seen since those early days," Atwell said.

With construction visible from Centennial Parkway and Western Boulevard, the crews are used to people stopping to take pictures of their progress.

"I work just down the street, so we've been watching the structure go up week by week," said Michael Terreri. "Seeing the dome go on top is going to be pretty neat."

The dome is 65 feet tall and, because of the elevation of the cathedral site off Centennial Parkway, is visible from almost every part of downtown Raleigh and beyond. The sight, Atwell said, will help establish its purpose – bringing people together in fellowship. He expects it will draw the faithful and the fallen away.

"We’re hoping it’ll be a moment to kind of bring them home a little bit," he said. "Beauty draws people naturally. They want to know more when they see something beautiful.

The entire cathedral construction project will cost an estimated $41 million.