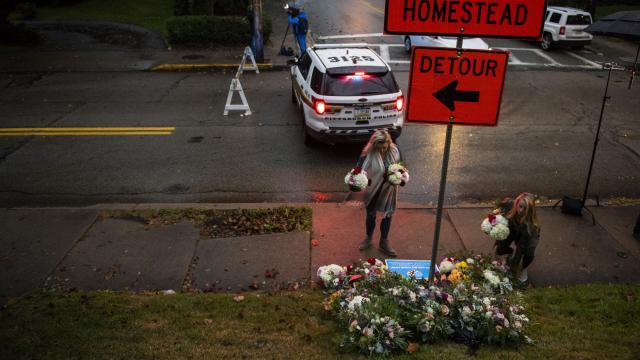 PITTSBURGH — As the man accused of killing 11 congregants in a hate-filled attack on a Pittsburgh synagogue prepared to make his first court appearance Monday afternoon, two Jewish groups called on President Donald Trump to back down from what they said was inflammatory rhetoric that seemed to be encouraging the most radical fringes of American society.

Saturday’s attack in the Tree of Life synagogue ended when the gunman, identified by authorities as Robert Bowers, surrendered to police officers while wounded and crawling on his knees. He “wanted all Jews to die,” he told a SWAT officer then, authorities said, because Jews “were committing genocide against his people.”

The victims of the attack, beloved members of one of the country’s vital Jewish communities, were mostly in their 70s and 80s.

Bowers was scheduled to appear before Magistrate Judge Robert C. Mitchell in the federal courthouse in downtown Pittsburgh on Monday at 1:30 p.m.

Federal officials have charged him with 29 criminal counts, included obstructing the free exercise of religious beliefs — a hate crime, which can carry the death penalty, a sentence that federal authorities said Sunday they intended to pursue. He also faces state charges.

Trump, who called for unity at a rally on the day of the shooting and later ordered flags to fly at half-staff, has said he would travel to Pittsburgh. But the Pittsburgh chapter of the progressive Jewish group, Bend the Arc: Jewish Action, which is focused on social justice in the United States, said in an open letter to Trump that he was “not welcome in Pittsburgh until you fully denounce white nationalism.”

The letter, which had 26,000 signatures Monday morning, said Trump’s language had given confidence to white nationalists.

“For the past three years your words and your policies have emboldened a growing white nationalist movement,” the letter said. “You yourself called the murderer evil, but yesterday’s violence is the direct culmination of your influence.”

The chairman of the board of Bend the Arc: Jewish Action is Alexander Soros. He is the son of George Soros, the billionaire philanthropist and major donor to Democratic candidates, who is Jewish and who survived Nazi occupation in Hungary.

Soros is repeatedly cited in right-wing conspiracy theories, and was targeted in last week’s wave of mailed pipe bombs. Trump has claimed Soros paid for “rude elevator screamers” to protest Supreme Court Justice Brett Kavanaugh, and Rep. Matt Gaetz, R-Fla., has asked on Twitter if Soros is behind the migrant caravan.

Another progressive Jewish group, IfNotNow, invited Americans to a nationwide call this week, saying that the attack in Pittsburgh was “not an isolated incident,” and that now, a week ahead of midterm elections, “is the time to act.”

In a statement on its website, the group was blunt: “Trump and the Republicans are directly responsible for this wave of white nationalist terrorism sweeping the country.”

But other people in Pittsburgh’s Jewish community said they would be glad for a visit from Trump, including Rabbi Jeffrey Myers of the Tree of Life synagogue.

“The president of the United States is always welcome,” Myers said on CNN on Monday. “I am a citizen. He’s my president. He is certainly welcome.”

Bowers, a 46-year-old with no criminal record whose social media feed was riddled with anti-Semitic rants, is accused of carrying out a massacre in the Squirrel Hill neighborhood, the heart of Jewish life in Pittsburgh that is home to about a quarter of the city’s Jewish households.

On Monday, survivors were still coming to terms with the horror of what occurred. Until two months ago, Myers rarely carried his cellphone with him on the sabbath, the holiest day of the week on which some Jewish people avoid technology and electronics. But in August, a security expert told him that “it was a different world” and that he needed to have his phone nearby.

Because of that training, the rabbi was the first person to call the police Saturday. He stayed on the phone for 20 minutes, until SWAT evacuated him.

“I learned a number of important things from him,” Myers said about the security training in August in an interview Monday on ABC’s “Good Morning America.” “He said, ‘Rabbi, it’s a different world and you need to carry it.’ I’m so grateful for his presence and teaching me.” Myers said that about five minutes after the Saturday service started at 9:45 a.m., he heard a loud sound in the lobby on the floor below. It sounded like a coat rack had fallen, he recalled. But then another loud bang rang out.

“It was apparent to me,” he said, “that it was not the sound of a piece of metal falling down.” He added, “it was rapid fire.”

Myers said about a dozen people were in the sanctuary when the firing started, and he yelled for everyone to drop to the ground and stay quiet. He began evacuating the congregants, starting with a handful of people at the front of the sanctuary. He moved them to safety. There were still eight people still in the room, all in the rear, but it was too late to help them, he said.

The gunfire was getting louder. The gunman was moving closer to the sanctuary.

“There was no way for me to get back,” he said.

Seven of the eight people were killed, he said. The person who survived, a woman, was wounded but expected to live.

“I live with that, the sounds that are seared in my brain for the rest of my life,” Myers said on CNN. “I have a congregation to take care of. I have families that need me. I have funerals to plan.”

On Sunday night, the Justice Department said that the U.S. attorney for the Western District of Pennsylvania, Scott Brady, had initiated the approval process for seeking the death penalty against Bowers. The ultimate decision rested with Attorney General Jeff Sessions.

The section’s half a dozen or so prosecutors have worked with U.S. attorney’s offices on prosecutions like that of Dzhokhar Tsarnaev, one of the Boston Marathon bombers, and Dylann S. Roof, who murdered nine people at an African-American church in South Carolina.