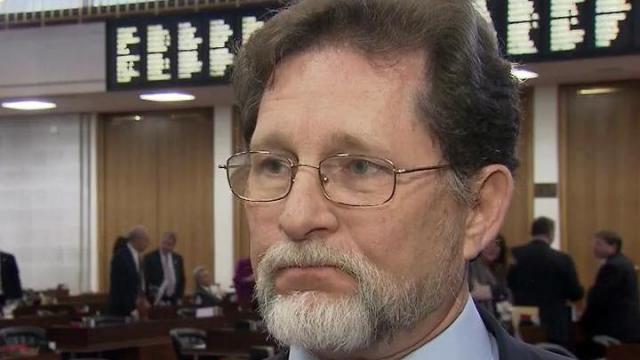 Pittman was taped making the remarks in during a town hall meeting in Concord by a tracker for American Bridge, a Democratic group that follows Republicans at public speaking engagements.

This isn't the first time Pittman has gained notice for remarks he made to a citizen group. In May, Pittman had to apologize to House Speaker Thom Tillis for suggesting Tillis' U.S. Senate bid had caused the House leader to back off conservative policies.

Pittman has also suggested abortion doctors ought to be hanged and suggested that the state ought to amend its constitution to resist attempts by the federal government to regulate firearms.

In this latest video, posted on Oct. 25, Pittman recounts seeing a picture of Obama with the word "traitor" plastered over it.

"I don't always agree with the guy, certainly didn't vote for him. But I've got to defend him on this one," Pittman says in the video. "I just don't think it's right at all to call Barack Obama a traitor. You know, there's a lot of things he done wrong, but he is not a traitor. At least not as far as I can tell, because I've not come across any evidence yet that he has done one thing to harm Kenya."

The line, which earned guffaws from the crowd, echoes the discredited "birther" theory that Obama was born in the African nation rather than in Hawaii, despite documentation to the contrary.

It's unclear whether Pittman actually believes Obama was born overseas or was just playing for laughs. A call to his house and an email to his legislative email account were not immediately answered.