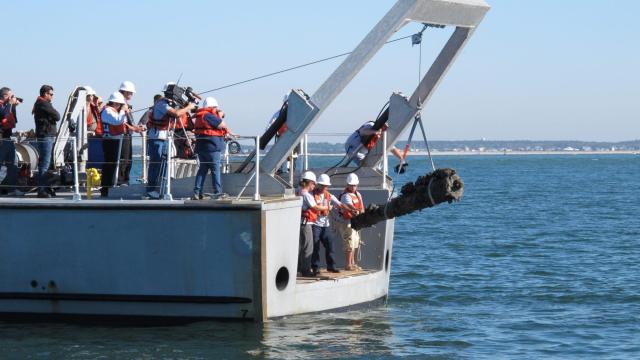 Raleigh, N.C. — State leaders are facing a second lawsuit connected to the wreck of the Queen Anne’s Revenge, the flagship of the infamous pirate Blackbeard.

The owner of Nautilus Productions, a Fayetteville photography company that began documenting the recovery of the wreck after it was discovered in the late 1990s, says the state misused his footage and engaged in a "conspiracy" to pass a new state law that would make his work available to the public without compensation.

The legislation, passed by the General Assembly and signed into law by Gov. Pat McCrory in August, says photos, videos and other media of "a derelict vessel or shipwreck" in the custody of a state agency will become public record without limitation. Nautilus Productions owner Rick Allen maintains the measure, which he dubbed "Blackbeard's Law," is unconstitutional.

“It is outrageous that the agency charged with promoting the arts in North Carolina does so through the misuse of its citizen’s property," Allen said in a press release Tuesday. "Blackbeard’s Law affects every artist, writer, photographer, producer, historian and donor in N.C. and sets a dangerous precedent for N.C. government overreach."

Reached by phone, Allen, who worked as a photographer for WRAL News in the 1990s, declined to comment beyond his written statements.

The lawsuit filed Tuesday in U.S. District Court names a number of officials, including the governor, two state lawmakers and top leaders with the Department of Natural and Cultural Resources, which oversees the salvage and preservation of shipwrecks off the state's coast. Nautilus is seeking damages and asking the court to void the portion of the law governing photography and video of shipwrecks.

DNCR spokeswoman Cary Cox said Thursday morning the agency had not yet been served with the suit, but that she was confident the agency "handled this situation in an appropriate and proper manner." In July, Cox said the legislation has no effect on any current agreements, and the text of the bill says it applies only to agreements entered into or renewed after the law took effect in August.

"As caretakers of archival records who care strongly about openness in government and public records, House Bill 184 is part of an ongoing effort of the Department of Cultural Resources’ desire to clarify what is a public record and when it can be made available to the public," Cox said in a July 29 email.

In the lawsuit, attorneys with Nautilus say the state has already used the law to argue against a separate $8.2 million lawsuit by another company, Intersal Inc., which in 1996 discovered the wreck about a mile off the coast of Atlantic Beach. Intersal's suit says the state breached its contract with the company, which it renegotiated in 2013, to share rights and proceeds from media and artifact tours associated with the Queen Anne's Revenge. Nautilus was not a party to that suit, although the company has worked with Intersal to document the shipwreck's recovery since 1998.

By improperly displaying thousands of images from the Queen Anne's Revenge site and violating other parts of the agreement, the Intersal suit alleges, the state has impacted the company's ability to make back its investment in the search for the ship.

DNCR officials have denied any breach of contract in the case.

CORRECTION: A previous version of this story used the former name of the N.C. Department of Natural and Cultural Resources, which changed earlier this year.