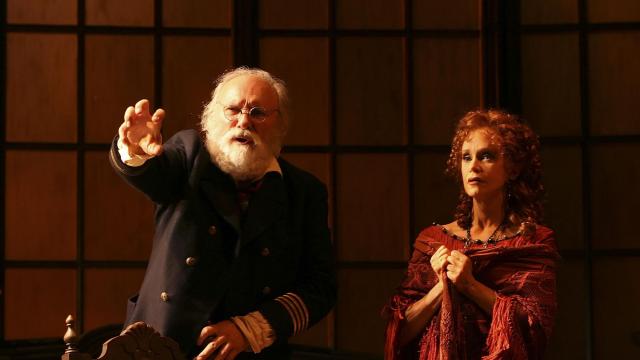 Philip Bosco, a character actor who was a familiar face for years in movies, on television and especially on the Broadway stage, where he won a Tony Award and was nominated for five more, died Monday night at his home in Haworth, New Jersey. He was 88.

His daughter Celia Bosco said the cause was complications of dementia.

A tall man with a hearty manner and a voice that could shift easily from stentorian boom to silken purr, Bosco received his first Tony Award nomination for his Broadway debut, in 1960, and his last for his role as the angriest member of the jury in a murder trial in the 2004 production of Reginald Rose’s intense drama “Twelve Angry Men.”

Known for his versatility, Bosco won his one Tony, in 1989, for portraying a buffoonish opera impresario in Ken Ludwig’s farce “Lend Me a Tenor.”

As late as 1979, when he had already appeared in more than 30 Broadway productions, he told The New York Times, with more resignation than rancor, “There are a lot of actors like me who have been working a long time, yet no one knows you outside the theater world.” He added, “You could say all of us are waiting in the wings for that great role.”

If he never did have that one great role, he had more than a few memorable ones in a career that lasted more than 50 years. Many of those roles were written by George Bernard Shaw.

Although he told one interviewer that he had not “followed any particular course in pursuing Shaw” (while acknowledging that it was “heavenly for an actor to wrap his tongue around those delicious words”), it became his specialty; Bosco played more than a dozen Shavian roles.

When he played the voluble munitions maker Andrew Undershaft in Shaw’s “Major Barbara” at the Circle in the Square in 1980, Walter Kerr wrote admiringly in The Times that Bosco could “maintain a machine-gun pace without losing a gleeful syllable or an ounce of Shaw’s art.” Frank Rich, reviewing Bosco’s performance as the British general John Burgoyne in “The Devil’s Disciple,” Shaw’s Revolutionary War drama, at the same theater in 1988, wrote, “While there are no sure things in the New York theater, the partnership of George Bernard Shaw and Philip Bosco comes close.”

Two of Bosco’s Tony nominations were for his work in Shaw plays: for featured actor in “Heartbreak House” (1983) and lead actor in “You Never Can Tell” (1987). (His other nomination was for another Ken Ludwig farce, “Moon Over Buffalo” in 1995, in which he and Carol Burnett played a bickering theatrical couple.) Fittingly, his final Broadway appearance was in another production of “Heartbreak House,” this time in the lead role, in 2006.

Bosco was well established as a repertory actor when he earned his first Tony nomination, for his supporting performance in “Rape of the Belt,” a comic take on Greek mythology that lasted only nine performances.

Before taking that part he had spent two years with the Arena Stage company in Washington. He later worked with the American Shakespeare Festival in Stratford, Connecticut, before beginning a long stint with the Lincoln Center Repertory Company. In 1981, he estimated that he had appeared in more than 70 productions, of everything from Sophocles to Tennessee Williams, with those companies and others.

Philip Michael Bosco was born Sept. 26, 1930, in Jersey City. His father, Philip Lupo Bosco, was a carnival worker; his mother, Margaret (Thek) Bosco, was a crossing guard. As a young man, he drove a truck.

He attended the Catholic University of America in Washington before, as he recalled, being asked to leave because his focus on acting had caused him to neglect his studies. After serving in the Army, he was allowed to return to the university and obtained his degree. Before long he was performing at the Arena Stage.

He married his college sweetheart, Nancy Ann Dunkle, in 1957. In addition to his wife and his daughter Celia, he is survived by three other daughters, Lisa Bosco-Tafro, Diane Bosco and Jennifer Bosco; three sons, Philip, Christopher and John; two brothers, Donald and David; and 15 grandchildren.

Among Bosco’s many other roles on Broadway were Mack the Knife in “The Threepenny Opera” (1976), Captain Queeg in “The Caine Mutiny Court-Martial” (1983) and the renowned physicist Niels Bohr in Michael Frayn’s “Copenhagen” (2000), a performance that many said should have earned him another Tony nomination. He often had his next project lined up in advance. “I don’t like long runs,” he once said. “You get in a rut.” And, he added, “I have never turned down a job because there is not enough money.”

He did, however, turn down many movie roles, even when there was more than enough money. In 1986, he told The Times that he had been offered a seven-year film contract early in his career but declined it because he did not want to live in Hollywood.

He rarely accepted a role that involved filming in a distant location, mostly because of a lifelong fear of flying. And he was not a fan of the filmmaking process.

“You rush, rush, rush to get into one scene,” he explained, “and then you sit and wait four hours before you get into another.”

He nevertheless amassed an impressive filmography starting in the 1980s, working for directors like Mike Nichols (“Working Girl”) and Woody Allen (“Deconstructing Harry,” “Another Woman,” “Shadows and Fog”) and playing small but crucial roles — usually as an authority figure of some kind — in hit movies like “Trading Places” (1983), “Children of a Lesser God” (1986), “Three Men and a Baby” (1987) and “My Best Friend’s Wedding” (1997).

Bosco was also seen frequently on television, especially in the days when New York was still a center of TV activity. He appeared on soap operas (“As the World Turns,” “Guiding Light,” “Ryan’s Hope”), dramatic anthologies (“Armstrong Circle Theater,” “Great Performances”) and prime-time dramas (“The Defenders”).

Later, like numerous other New York actors, he was on both “Law & Order” and, in a recurring role as a judge, “Law & Order: Special Victims Unit.” He won a Daytime Emmy Award for his performance as a toymaker on an “ABC Afterschool Special” in 1987. For all Bosco’s accomplishments, his philosophy of acting was simple. He was dismissive of what he called “the Actors Studio ideal” of naturalism. As he told The Times in 1981:

“The only real way to learn to be an actor is to act. All the theory is meaningless unless you really do it. You’ve got to get out there, man. You’ve got to jump in the pool.”