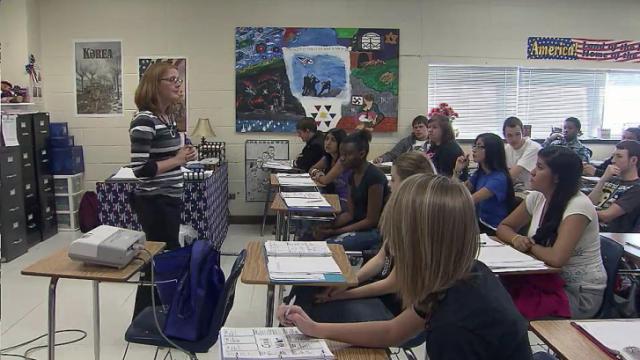 One high school freshman is determined to change how the new grading scale will be implemented in public schools next year.

Parker Renberg, a freshman at Leesville Road High School in Wake County, says he’s upset that the grading scale changes will not affect him or any other current high school student.

“They could give it to current students, but they’re not. So it almost feels like we’re being robbed,” said Renberg, who wants to either study biomedical engineering or architecture.

He argues that it is not fair that he could be in the same class as a freshman, they could both get 92s, but he would get a B while the other student would get an A.

“That would be pretty frustrating,” he said.

Renberg has started an online petition to present to the state, which has already garnered hundreds of signatures.

State officials say they have no plans to make revisions to how the changes are rolled out, but acknowledge that some teachers could decide to evaluate all students under the new scale to make grading more manageable. Officials say that phasing in the new scale will make sure that class rankings stay consistent and fair.

New scale based on 10-point increments

Some of the state's largest school districts were pushing for the change, arguing that it would level the playing field. They said that students living in states with 10-point scales are at an advantage when applying to colleges. Only four states require school districts to adopt a 7-point scale.

One North Carolina student felt so strongly about the issue that he wrote legislation this year, trying to convince lawmakers to move away from the 7-point scale.

Rebecca Garland, the state’s chief academic officer, has said, “there is no easy way to transition.” But she commends the board for making the move.

Student transcripts will include both number grades and letter grades.