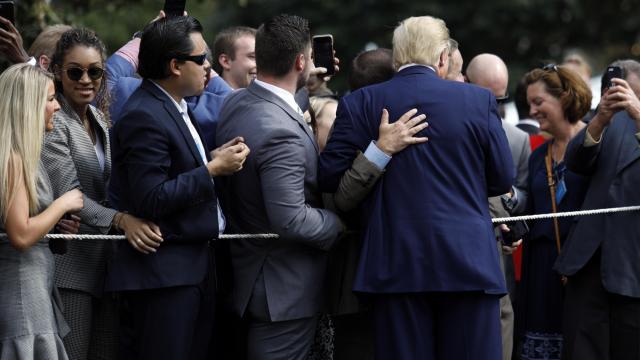 EDITOR'S NOTE: Peter Wehner, a senior fellow at the Ethics and Public Policy Center, served in the previous three Republican administrations and is a contributing opinion writer, a visiting professor at Duke and the author of “The Death of Politics: How to Heal Our Frayed Republic After Trump.”

In a sane world, the reaction of Republicans to the “memorandum of telephone conversation” between President Trump and the president of Ukraine, Volodymyr Zelensky, combined with the whistle-blower complaint filed by an intelligence officer describing a White House cover-up, would be similar to the response of Republicans after the release, on Aug. 5, 1974, of the “smoking gun” tape that finally broke the Nixon presidency. Republicans would begin to abandon Mr. Trump, with senior figures urging him in private and in public to resign.

This may be asking too much of Republicans, who have lost their way in the Trump era. One might hope that some of the party’s elected officials would forcefully condemn the president on the grounds that there is now demonstrable evidence that he had crossed an ethical line and abused his power in ways even beyond what he had done previously, which was problematic enough.

But things are very different today than they were in the summer of ’74. Mr. Trump was on to something when he famously said, during the 2016 campaign, “I could stand in the middle of Fifth Avenue and shoot somebody and I wouldn’t lose any voters, O.K.? It’s, like, incredible.” What most people took to be hyperbole turned out to be closer to reality.

This isn’t to say that some Republican members of Congress aren’t deeply uneasy with Mr. Trump’s conduct. A few, including Senators Mitt Romney and Ben Sasse, have expressed their concern. But many others, from Senator Lindsey Graham to Kevin McCarthy, the House minority leader, are aggressively defending Mr. Trump, going so far as to argue that the notes from his July 25 conversation with Mr. Zelensky are exculpatory.

They are hardly that. Not only did the president ask a foreign government to intervene in a presidential election by digging up dirt on a political opponent, as he did in 2016 when he invited Russia to search for Hillary Clinton’s emails; this time, invested with the enormous power of the presidency, Mr. Trump appears to have used hundreds of millions of dollars in military assistance to pressure a foreign leader to act as the head of his opposition-research unit.

How does a quid pro quo play out in Trump world? Something like this: You want Javelin missiles to help protect you from Russia? Great. Then I have a favor to ask of you: Investigate a political rival of mine. For more details, talk to my personal attorney. Oh, and also the attorney general of the United States.

That something like the Trump-Zelensky phone call would occur was entirely predictable given what we know about Donald Trump. He is an extreme narcissist, pathologically dishonest, shameless, a man who delights in flouting norms. He has a mobster’s mentality. Mr. Trump’s behavior isn’t governed by moral standards; he doesn’t seem to believe objective moral standards even exist. He can no more understand the language of morality than a person listening to someone speak a foreign language for the first time can.

Why, then, are so many Republicans yet again circling the Trump wagon rather than taking this opportunity to denounce what the president did and declare some independence from him by doing so? Why has Mr. Trump, an ethical wreck of a man both before and after he reached the White House, earned such fealty from Republicans?

The answer to that question is complicated, and it goes well beyond the fact that Mr. Trump is advancing certain policies they believe in. The case for Republicans casting a vote for Mr. Trump in 2016 on those grounds is defensible, though I made a different choice. But here’s what’s also true: Republicans could support Mr. Trump’s agenda while simultaneously condemning his corrupt behavior. Yet the vast majority of them refuse to do so. Something more is going on here. In order to find out what, I spoke to several former Republican officials and aides, who all requested anonymity in order to speak freely.

Understanding the close compact between Mr. Trump and the Republican Party starts with acknowledging the false hope many establishment Republicans placed in the shady real estate mogul as he rose to power. They misdiagnosed the individual they were dealing with, assuming that Mr. Trump would “grow in office” and that they, the “adults in the room,” would be able to control and contain him. At the outset of this unholy alliance, they were convinced they would change Mr. Trump more than Mr. Trump would change them. But the transformation turned out to be in them, not him.

Nor should one underestimate the role self-interest plays in the Trump-Republican relationship. “All people in elective politics are interested in self-preservation,” a Republican who served in the Senate told me. “Any negative comment by a Republican in Congress about the president would invite trouble in the next election either in the form of opposition in the next primary or lack of support in the general.”

“Until Republicans feel their existence is threatened by Trump’s mendacity and corruption, most will be blind to it,” a former Republican presidential aide told me. “That isn’t to say there won’t be leading indicators of potential moral restoration,” he said, “but in the meantime, the cowed stay in line like the trophies of a bully.”

“This storm has more staying power than most,” he added, ominously.

There’s also this to factor in: For many Republican members of Congress, the president is more popular among Republican voters in their districts and states than they are. Even in the districts of moderate Republicans, Trumpist true-believers are the most vocal supporters of the party, the ones who do the essential grass-roots work. So to go crosswise of a sitting president of one’s own party invites political trouble, which most politicians seek to avoid. That is especially true when it comes to Mr. Trump, who specializes in savaging Republicans — and everyone else, for that matter — who dare to criticize him.

“They don’t want to get bludgeoned,” a person who served in Congress told me. “Their mind is looking for a rationale for not having to do it.” In addition, this person added, Mr. Trump has “conditioned people in the base so much so that it’s just ‘us versus them’ and that if you give an inch on him, you’re just giving the other side what they want. You’ve made yourself a ‘useful idiot.’”

All of this is tied to the psychology of accommodation. As a conservative-leaning clinical psychologist I know explained to me, when new experiences don’t fit into an existing schema — Mr. Trump becoming the leader of the party that insisted on the necessity of good character in the Oval Office when Bill Clinton was president, for example — cognitive accommodation occurs.

When the accommodation involves compromising one’s sense of integrity, the tensions are reduced when others join in the effort. This creates a powerful sense of cohesion, harmony and group think. The greater the compromise, the more fierce the justification for it — and the greater the need to denounce those who call them out for their compromise. “In response,” this person said to me, “an ‘us versus them’ mentality emerges, sometimes quite viciously.”

“What used to be a sense of belonging,” I was told, “devolves into primitive tribalism, absolute adherence to the leader over adherence to a code of ethics.”

Now tie this into our politics. Several years ago — whether it was in the aftermath of Mr. Trump’s racist attacks on Judge Gonzalo Curiel, the release of the “Access Hollywood” tape or the president’s disturbing comments after the white supremacist rally in Charlottesville, Va. — Republicans were willing to call out Mr. Trump. But that proved to be ephemeral.

Month after month, with one outrageous, norm-shattering comment or action giving way to another, Republicans who in the past could never have envisioned being Trump acolytes, have been ground down. Accommodation has kicked in, which is a psychological relief to many of them. For those who view Mr. Trump as a model politician who voices their grievances and fights with a viciousness they have long hoped for from Republicans, the accommodation is not just a relief but a source of delight.

As the psychologist I spoke to put it to me, many Republicans “are nearly unrecognizable versions of themselves pre-Trump. At this stage it’s less about defending Trump; they are defending their own defense of Trump.”

“At this point,” this person went on, “condemnation of Trump is condemnation of themselves. They’ve let too much go by to try and assert moral high ground now. Calling out another is one thing; calling out yourself is quite another.”

As a result, many in Mr. Trump’s party not only refuse to challenge his maliciousness; they have adopted his approach. They have embraced his “will to power” worldview. After dealing with Mr. Trump, “you’re definitely denuded and jaded,” one Republican who has interacted recently with members of Congress told me. “Your sense of perspective is totally warped.”

Many Republicans now find themselves in a place they never envisioned — not only defending Mr. Trump but doing so with gusto. Those who once defended traditional values now relish siding with the Great Transgressor. “Owning the libs” turns out to be a lot of fun. But it also comes at a high cost.

A person who was once an aide to a current Republican senator told me that his former boss, who in private will concede that he is quite troubled by Mr. Trump’s unethical conduct, will say “nothing that would cause the president to question his complete loyalty.” This individual went on to tell me, “The sad part about this is that no policy or new law is worth undercutting our norms and checks on power that will cause irreparable damage to our system.”

The Republican Party is the party of Donald Trump, through and through. As such, it has become morally disfigured. The party finds itself deep in a dark alleyway. It can eventually find its way back. Renewal and regeneration are always possible. But that will require the Republican Party and its future leadership to repudiate much of what it now embodies. I happen to believe that this is an essential task. But it won’t be an easy one, and every day it is delayed, the harder it becomes.

Mr. Trump’s most recent abuse of power — pressuring the Ukrainian president to do his dirty work — is the latest link in a long chain of corruption. If Republicans don’t break with the president now, after all he has done and all he is likely to do, they will pay a fearsome price generationally, demographically and, above all, morally.