Pete Holmes of ‘Crashing’ Finds Humor in His Church Roots 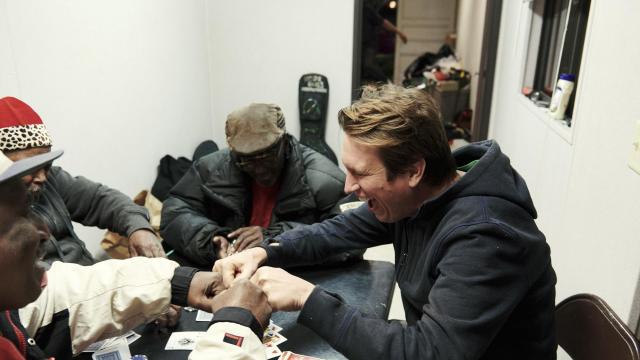 LOS ANGELES — "Were you following me?” said Pete Holmes, the 38-year-old actor and comedian, as he stood near the front gate of his bungalow in the Los Feliz neighborhood of Los Angeles last month.

“Sorry, I was just sitting in traffic and am literally just getting back from a week in Hawaii,” Holmes said, explaining his momentary bout of paranoia. “Things are a bit chaotic.”

Tall and gangly, with a cartoonish quality to his movement, Holmes then opened the front door to the humble four-bedroom home that he shares with his wife of one month, Valerie. Dressed in a navy blue hoodie and gray khakis, he petted his rescue dog, Brody, and plopped down a heap of unopened mail on the dining room table.

“Please excuse me,” Holmes said as he hurried off to use the bathroom. He returned, sat down on the living room couch and let out a sigh. “OK,” he said. “Now where were we?”

Holmes said he had spent the previous week in Maui at a meditation and yoga retreat with spiritual leader Ram Dass. But the “spiritual cleansing,” as he called it, was apparently no match for the stresses of Los Angeles traffic.

He was also facing a pile of deadlines. He needed to finish editing “Crashing,” the HBO show he created and stars in, and which returns for a second season Sunday. And there was a mountain of emails in his inbox. The prospect of having to reply to each one seemed to overwhelm him.

He continued: “But if it’s a no, I’m not going to write and say, ‘It’s a no.’ When you’re really hungry or desperate, a nonreply is a really mean thing. And you might hold that against somebody for years. And yet I do it with people who work for me.”

One is left to imagine how much more frazzled Holmes would be if it weren’t for his meditation retreats. “I find spirituality so much more essential in a world like the one I live in now,” he said, as he moved to the front porch, where he sank into a love seat, crossed his legs and, for the first time that afternoon, offered his undivided attention. “It’s not just a Sunday-only thing for me. It’s something I’m constantly reading and thinking about.”

Spirituality is in his blood. Raised in the Boston suburb of Lexington, Holmes attended Gordon College, an evangelical Christian liberal arts school. He married his first girlfriend, at 22, less than a year after graduating, and began performing stand-up comedy.

His early material was PG-rated, but getting divorced six years later made him re-evaluate his life. And his comedy.

He began making a name for himself as a slightly goofy but confessional voice on the stand-up circuit, culminating in an appearance on “The Tonight Show With Jimmy Fallon” in 2010. The next year, he appeared on “Conan.” A TBS network executive took notice of his skill set — a relatable brand of comedy with cross-generational appeal — and, in 2013, gave Holmes his own late-night series.

“The Pete Holmes Show” combined sketch comedy, live performance and in-studio interviews, but ran for only two seasons. Since then, Holmes has mined his own history for a popular podcast, “You Made It Weird.” “Crashing,” which started as a self-deprecating joke on his TBS show, came to fruition in the hands of the comedy bigwig Judd Apatow.

While Holmes still embraces his Christian upbringing, he has begun to explore Buddhism. In Hollywood, where he has lived for seven years, “the pitfall of buying and believing your own hype is a deep, echoing, wet, cold sadness,” he said. “For me, religion and spirituality is about reintegrating with people, with community, with connection, with union.” It’s also why he enjoys getting out in his neighborhood. “Want to grab a coffee?” he said suddenly, unfurling his 6-foot-5 frame from the gray couch.

Holmes placed a leash on Brody, opened the front gate and walked down a restaurant-filled stretch of Vermont Avenue. Three blocks away, he arrived at Bru Coffeebar, a third-wave coffee shop that brews its free-trade beans proudly. Holmes exchanged pleasantries with a barista and ordered a double espresso.

Before he could sit down, however, his phone rang. It was his publicist. She had arrived at his house and was wondering where he was. He told her he’d be back in 10 minutes.

“I always forget they’re coming,” he said with a look of disgust. When he signed a deal for “Crashing,” Holmes decided it was time to hire publicists. Still, he questions their utility. “It’s like still somebody who is just there trying not to be there,” he said, as he exited the coffee shop.

“Crashing” draws extensively from Holmes’ life: It follows Pete, a religious Christian comedian whose wife cheats on him, forcing him to question his faith and dedicate all his efforts to a stand-up career. Not that success has made Holmes feel like any less of a grinder.

“You’re always climbing higher and higher, and it’s never enough,” he said. “More viewers and more money and more magazines and covers.” Returning home, he greeted his peppy publicist and took a seat again on the front porch, before remembering he had some errands to do, including picking up a Christmas tree. Shopping for a tree, he said, not only reminded him of his childhood, but it was also “one of the last remaining things where you can negotiate the price,” he said. “Well, this and hookers.”

He hopped into his white Audi SUV for the short drive to Frosty’s Christmas Trees. It was just after 4, and the traffic on Franklin Avenue was already making him tense. He took a deep breath to clear his mind.