Ocean Isle Beach, N.C. — At least one person was injured Thursday when a second massive fire ravaged several homes at Ocean Isle Beach only days after the first.

Witnesses said the fire started in a car beneath a home, then it spread to all of the homes around it.

""[I] heard a big explosion. I thought maybe it was fireworks, ran out - he said ‘it's a fire. Call 911’," recounted Cami Chewing-Barefoot, a witness to the fire.

Everyone was able to get out, but one man was hospitalized. WECT News reported the person was airlifted to UNC Hospitals in Chapel Hill.

The Barefoot family, who are from Raleigh, were cleaning up hurricane damage in their vacation home two doors down when the fire broke out.

"I yelled. I tried to get all the neighbors out, there was a good crowd over there," said Don Barefoot. "Only one guy came out and he said he was the only one. He looked like he was burned from his arms all the way to his hands."

"It was unbelievable when I was on the scene this morning," Ocean Isle Mayor Debbie Smith told WRAL News over the phone. “We’re trying to stay strong. This is a strong community. This is devastating – these are our friends and neighbors.” 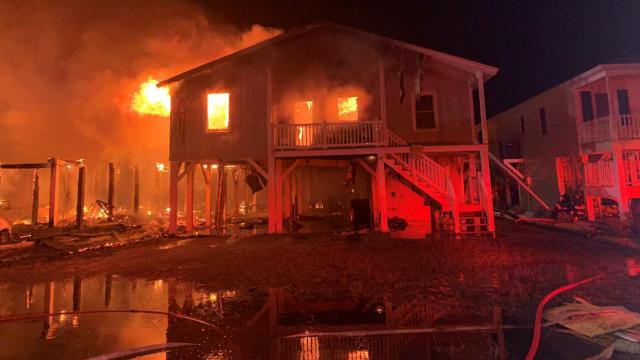 The cause the fire is believed by investigators to be a flooded-out car that ignited, WECT said. It's the second Hurricane Isaias-related fire in three days.

Cathy Allen Gunter, from Cary, was visiting her mom, who lives across the street. She said she was getting ready to go to bed when she heard some noises, looked out and saw a glow. When she went outside, she realized the noise she heard was an explosion from the fire.

Gunther said neighbors were checking on each other, and it appeared that everyone else got outside unharmed.

The Barefoots are still shaken by what they witnessed.

"We're glad we're here. We're sorry what happened to everyone, but we're glad we're safe. We really didn't know what the outcome was going to be," said Chewning-Barefoot.

Mayor Smith is asking anyone if they have flooded vehicles whether it's a car or golf cart beneath their homes to please remove it.

Ocean Isle Beach was one of the hardest-hit areas when Isaias slammed North Carolina late Monday and Tuesday. The storm made landfall near Ocean Isle as a Category 1 hurricane before moving up the state, affecting much of central and eastern North Carolina.

The worst damage at Ocean Isle Beach was caused by a fire that started at the height of the storm. The wind-driven flames wound up destroying nine homes on Driftwood Street, located just over a mile from Thursday's fire.

Residents said a an electrical transformer exploded early Tuesday during the hurricane, sparking the fires.

Smith said the fires, damage and now an injury are heartbreaking, but her community is strong.

“I just tell them to stay strong and watch out for each other," she said. "I’ve been here long enough, I’ve grown up with this community. I know an awful lot about these people, it’s devastating and heartbreaking.” 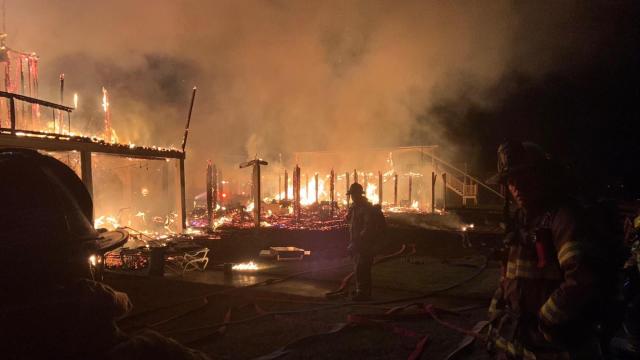 Hurricane Isaias moved out of North Carolina Tuesday afternoon, and while strong rip currents remain a threat at the coast, storm-force winds are no longer present.

Only residents and property owners were allowed back on Ocean Isle Wednesday, but the town reopened to the general public at 7 a.m. Thursday. Smith said the town is asking people to avoid the areas covered in debris.

Gov. Roy Cooper is scheduled to visit Brunswick County Thursday and meet with leaders there. On Wednesday, he visited Bertie County, where two people died when a tornado blew through a neighborhood.