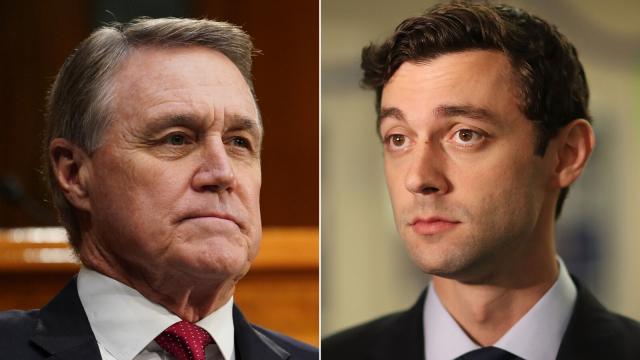 Perdue will instead attend an event with President Donald Trump, his campaign announced, on the heels of a debate that saw Ossoff label Perdue a "crook" and Perdue accuse Ossoff of profiting off China.

The stakes in the close race are high. Georgia has not one but two US Senate seats up for grabs, and some Republicans fear that Ossoff's strong challenge in a reliably red state, coupled with a splintered GOP fight for current Sen. Kelly Loeffler's seat, puts both seats at play as the party looks to avoid losing the US Senate.

"As lovely as another debate listening to Jon Ossoff lie to the people of Georgia sounds, Senator Perdue will not be participating in the WSB-TV debate but will instead join the 45th president, Donald J. Trump, for a huge Get-Out-The-Vote rally in Northwest Georgia," Perdue spokesman John Burke told CNN in a statement.

"Shame on you, Senator," Ossoff tweeted Thursday in response to the news. "At last night's debate, millions saw that Perdue had no answers when I called him out on his record of blatant corruption, widespread disease, and economic devastation."

Wednesday night in Savannah, Perdue at one point attacked Ossoff for raising large sums of cash from out-of-state donors who want a "radical socialist agenda."

Ossoff replied by hammering Perdue for being one of several Republican senators who faced scrutiny earlier this year for selling stocks ahead of the economic downturn sparked by the coronavirus pandemic.

"Perhaps Sen. Perdue would have been able to respond properly to the Covid-19 pandemic if you hadn't been fending off multiple federal investigations for insider trading," Ossoff said, adding, "It's not just that you're a crook, senator, it's that you're attacking the health of the people that you represent."

Perdue -- who has said he welcomes a full review of his stock trades and claimed he was cleared "completely" by the Department of Justice, the Securities and Exchange Commission, and Senate Ethics Committee -- dismissed Ossoff's attack Wednesday as "nonsense."

In another exchange, Perdue accused his Democratic challenger of personally benefiting from financial ties to a Hong Kong media company whose chair is opposed to the push for Hong Kong's independence from China. The GOP senator produced a piece of paper from his pocket he said was Ossoff's July financial disclosure, claiming it was proof that Ossoff was disguising the fact his documentary company sold a film to the Hong Kong company.

"He needs to own up to, because sooner or later, we need somebody in the United States Senate that will stand up to Communist China," he said.

Ossoff didn't directly dispute Perdue's accusation but said it was "so beneath the office of a US senator."

In July, Perdue's campaign took down a Facebook ad that appeared to make Ossoff's nose bigger, following accusations of anti-Semitism. A Perdue campaign spokeswoman said it was an "unintentional error" caused by an "outside vendor," and that Perdue has a "strong and consistent record of standing firmly against anti-Semitism."

"Well I absolutely meant no disrespect, I've said that publicly to Sen. Harris," Perdue said. "What I was talking about, and what I'm trying to do, is educate the people in Georgia about what's trying to be perpetrated here, and that is this radical socialist agenda that Jon Ossoff will clearly just be a rubber stamp for Chuck Schumer and Nancy Pelosi as they perpetrate this outrageous agenda on our country."

A Monmouth University poll out Wednesday showed Ossoff backed by 49% and Perdue with 46% support among registered voters in Georgia. If neither candidate receives a majority because of a third-party candidate on the ballot, the contest will advance to a January runoff.

The other Senate race in Georgia, in which multiple candidates from the same party are on the November ballot, is likely to go to a runoff. Democrats have coalesced around the Rev. Raphael Warnock, while Loeffler, who was appointed, is in a race to the right with GOP Rep. Doug Collins to finish in one of the top two spots.