Pepsi bets on plant-based snacks with Beyond Meat 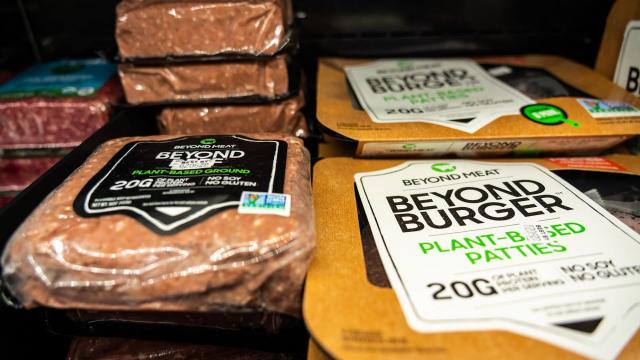 CNN — Beyond Meat and PepsiCo are combining forces to develop and distribute snacks and drinks made with plant-based protein as the plant-based trend gains even more traction.

With Pepsi, Beyond Meat — which already makes plant-based alternatives to beef and pork — will have access to a global distribution and marketing powerhouse. That means Beyond Meat will be able to enter more categories and bring new products to market more quickly, according to a Beyond Meat spokesperson. The US joint venture may include a future expansion into China and the United Kingdom, the spokesperson added. The companies did not disclose the financial terms of the deal.

The news prompted a surge in Beyond Meat stock. Shares closed up about 18% Tuesday.

Pepsi's marketing prowess could also get more people to try Beyond Meat's product.

"Historically, [Beyond's] marketing spend has been nominal (primarily social media)," UBS research analyst Erika Jackson wrote in a note on Tuesday. Pepsi could help push that marketing to a new level, and bring more customers into the fold.

For PepsiCo, the partnership is a way to get a piece of the plant-based protein pie.

"Consumer demand for plant-based products is large enough to make an impact in sales, as the plant-based alternative industry continues to grow," said Ramsey Baghdadi, consumer analyst at data and analytics company GlobalData, in a statement Tuesday. "PepsiCo's decision to widen its existing selection of plant-based snacks will be a game changer in the long-term, as more consumers naturally gravitate towards the trend."

PepsiCo often sets up partnerships to help establish itself in attractive segments, UBS's Jackson noted. For example, PepsiCo and Starbucks have partnered for years on ready-to-drink coffee beverages.