Pentagon close to reaching agreement to provide around 450,000 Covid-19 vaccinations a day if they're available 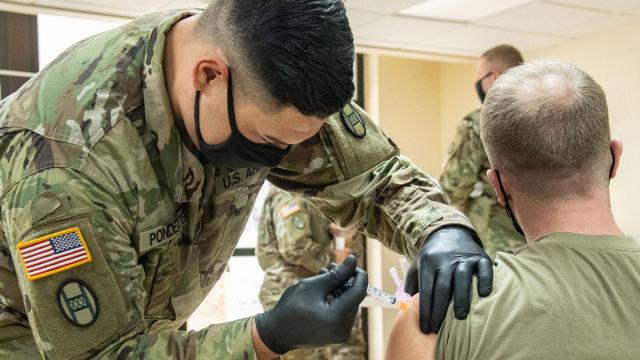 CNN — The Pentagon and the Federal Emergency Management Agency are negotiating the final terms of an agreement that could see the military provide around 450,000 Covid-19 vaccinations a day.

The figure is included in a draft agreement between the two agencies viewed by CNN that also calls for the deployment of 10,000 troops at 100 vaccination centers across the United States that would run through at least February 26 as a start.

As it stands, the Pentagon would not provide additional vaccine doses so the plan seems to be dependent on the amount of vaccines supplied to each state being increased.

On Tuesday President Joe Biden announced an increase in the weekly vaccine supply to states, tribes and territories -- upping the current 8.6 million doses to a minimum of 10 million doses weekly.

Several officials emphasize details of the agreement are still being worked out and could change before final approval for the deployment is given by Defense Secretary Lloyd Austin.

"The department is evaluating the request, and what kinds of support it can provide. Given the significance of the request, it will be reviewed urgently but carefully to determine what DOD assets can safely be made available to support the effort," Pentagon spokesperson John Kirby said in a statement on Thursday.

Since taking office, Biden has said his goal is to have as many as 1.5 million Americans vaccinated every day. The current average is 1.2 million a day since he took office so, should the agreement be successfully implemented and enough vaccines be supplied, it could help exceed his goal.

In the initial weeks of the vaccine rollout, several hospitals, health centers and pharmacies have thrown away vaccine doses because they have not been able to administer them fast enough or store them properly before the doses expire. This plan would provide more resources and personnel to administer more vaccines quickly, alleviating some of the burden from hospitals and health centers that are still overwhelmed with sick coronavirus patients.

Vaccination operations at the 100 designated locations would run 16 hours a day with two eight-hour shifts. As soon as the agreement is finalized, the troops would be placed on orders to be prepared to deploy within 96 hours.

The draft agreement also states that FEMA could issue additional orders to augment the effort with more personnel with Pentagon agreement.

The effort could also involve using both active duty and National Guard forces. Part of the discussion includes agreeing on what the most urgent tasks they can handle are, two defense officials told CNN.

National Guard Joint Surgeon General Major General Jerry L. Fenwick said the National Guard has not been notified of the need for additional National guardsmen to support this request, but stressed FEMA is "still very early in their planning cycle," during a media briefing on Friday.

22,900 national guardsmen are supporting COVID-19 response efforts in 38 states already, assisting with vaccination distribution and COVID-19 testing, among other tasks. They are administering 51,000 shots a day, Fenwick said on Friday.

Under the proposal the Pentagon would also provide communications and command and control elements for planning and coordination among the site locations. FEMA will be responsible for providing personal protective gear, site security, traffic control, and supplies and equipment to run the sites.

As of Tuesday, FEMA had obligated more than $1.2 billion to states, territories and tribes for expenses related to Covid-19 vaccinations at 100% federal cost share, the agency announced Wednesday in a news release.

Several officials tell CNN a final agreement is expected soon but it is not clear when it will happen.