Pennsylvania only has men in Congress. That's about to change. 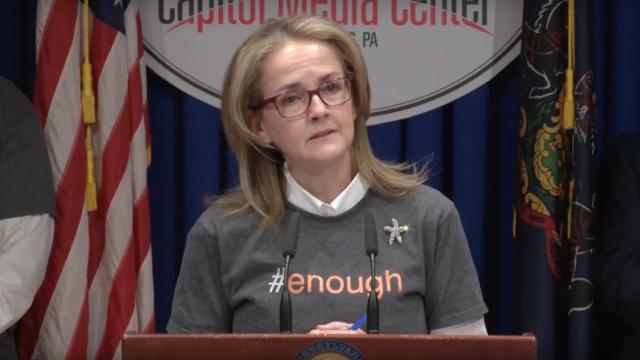 (CNN) — Pennsylvania's congressional delegation next year will no longer be made up of only men.

A host of women candidates won their primaries on Tuesday in Pennsylvania, with some entering general election contests that will ensure a woman will represent at least one district in Pennsylvania come 2019.

A woman is certain to represent Pennsylvania's Fifth Congressional District after Mary Gay Scanlon, a member of the Wallingford-Swarthmore school board, won the Democratic primary, and Pearl Kim, a lawyer, won the Republican nomination. The fifth district, which includes much of suburban Philadelphia and the southern reaches of the city, is seen as likely Democratic.

Madeleine Dean, a member of the Pennsylvania House of Representatives, also won her three-way Democratic primary for the party's nomination in the fourth congressional district, CNN projects.

Because that seat is widely viewed as a safe Democratic seat in all major House rankings, it is likely that Dean will defeat Dan David, her Republican opponent, in November -- barring a major shift in the news.

Both of these shifts would be groundbreaking for the commonwealth. All 20 members of Pennsylvania's current congressional delegation -- including its 18 House members and two senators -- are male.

And that's not for women failing to run. In 2016, seven women ran, with four Democrats and one Republican making it past the primaries. Zero won in the general.

The Center for American Women and Politics at Rutgers University rates Pennsylvania as the 38th most representative state for women in elected office and Kelly Dittmar, a scholar at Rutgers, said the state has historically rejected women candidates.

"You have had women candidates who really haven't been able to break through in general elections," Dittmar said. "So Pennsylvania will be a good test of (how women candidates will do in 2018) because it is not a state that women have done well historically."

Dean is one of a handful of female candidates that EMILY's List, a Democratic organization that finds and supports pro-choice Democratic women candidates, endorsed in Pennsylvania.

"Madeleine has been fighting for progressive policies in the state House for six years, and we are thrilled that she is another step closer to taking that fight to the halls of Congress," Stephanie Schriock, the president of EMILY's List, said in a statement on Tuesday. "The women and working families of this district will be well-served by a champion like Madeleine, which is why we are so proud to stand with her and congratulate her tonight."

Susan Wild, an attorney who was also endorsed by EMILY's List, also won her race for the Democratic nomination in Pennsylvania's seventh congressional district, besting John Morganelli, who conceded the race. Wild will have a good chance at reaching Congress, but the race is less solidly Democratic as the fourth district.

"EMILY's List has been and will continue to be with Susan every step of the way," Schriock said. "We are proud to congratulate her on her victory tonight."

And Chrissy Houlahan, another EMILY's List-backed candidate in Pennsylvania, won her unopposed Democratic primary for the sixth congressional district. She will face Republican Greg McCauley in the general election, a race that most rankings have rated a toss-up.

This story has been updated to reflect election results.