US Vice President Mike Pence was set to meet with North Korean officials, but they canceled 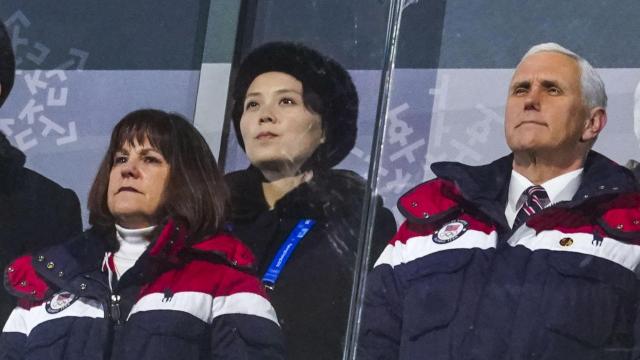 WASHINGTON (CNN) — US Vice President Mike Pence was set to meet with North Korean officials, including Kim Jong Un's sister, during his politically charged visit to the Winter Olympics in South Korea earlier this month, his office confirmed on Tuesday.

But the North Koreans pulled out of the meeting before it could happen, a move that Pence's office said was a sign their attempts to exert pressure on the regime were working. President Donald Trump had signed off on the decision to meet, with the caveat that the United States wouldn't back off its stated demand that Pyongyang abandon its nuclear weapons.

"North Korea dangled a meeting in hopes of the vice president softening his message, which would have ceded the world stage for their propaganda during the Olympics," said Nick Ayers, Pence's chief of staff.

North Korea sent a 500-strong delegation to the games made up of athletes, cheerleaders, domestic media and high-ranking government officials -- including Kim Yo Jong, the sister of North Korea's leader and head of the country's propaganda department, and Kim Yong Nam, North Korea's ceremonial head of state.

Their attendance was the result of diplomatic negotiations earlier this year between Seoul and Pyongyang, the first high-level talks in more than two years.

Ayers said Pence's meeting with defectors and his decision to host the father of Otto Warmbier, an American who died after being detained by the North Koreans, led the North Korean officials attending the games to reconsider the planned meeting.

"North Korea would have strongly preferred the vice president not use the world stage to call attention to those absolute facts or to display our strong alliance with those committed to the maximum pressure campaign. But as we've said from day one about the trip: This administration will stand in the way of Kim's desire to whitewash their murderous regime with nice photo ops at the Olympics," Ayers said. "Perhaps that's why they walked away from a meeting or perhaps they were never sincere about sitting down."

Pence had told reporters that the purpose of his trip was to "make sure that North Korea doesn't use the powerful symbolism and the backdrop of the Winter Olympics to paper over the truth about their regime."

However, ahead of his arrival at the Olympics, Pence said he hadn't ruled out meeting with North Korean officials, who were attending the games along with a delegation of athletes and a cheerleading squad.

Standing in front of an F-22 fighter jet at Elmendorf Air Force Base in Alaska, Pence said Trump "has said he always believes in talking, but I have not requested any meeting. But we'll see what happens."

At that point, plans were not yet finalized for the meeting, though Trump, Pence and other administration officials had agreed in theory to a sit-down with the North Koreans who were attending the Olympics. Pence was due to meet with Kim Yo Jong and Kim Yong Nam on February 10, but the North Koreans abandoned plans for talks two hours beforehand.

The meeting was set to take place at the Blue House in Seoul, officials confirmed.