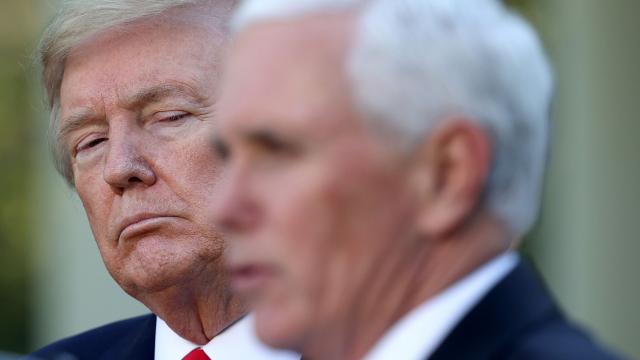 CNN — Former Vice President Mike Pence told a group of conservative lawmakers on Tuesday that he maintains a close personal friendship with former President Donald Trump, while noting that he plans to launch a political organization that will defend their administration's record over the past four years.

Rep. Jim Banks, an Indiana Republican who chairs the conservative Republican Study Committee, told CNN that a group of members met at Pence's transition office in the Washington area on Tuesday afternoon, talking about the way forward for their party while also touting the accomplishments of the past.

Pence harbored no ill will towards Trump over the January 6 riot, where pro-Trump rioters stormed the US Capitol with many looking for Pence who was presiding over the congressional certification of Joe Biden's victory. In fact, Trump's actions ahead of the riot "never came up," Banks said.

"He spoke very favorably about his relationship with President Trump," Banks told CNN. "I got the sense they speak often and maintain the same personal friendship and relationship now that they have for four years."

CNN reported Monday that Pence and Trump have spoken twice since the inauguration last month, according to a knowledgeable source who described their relationship as "amicable."

Banks said that he expected Pence -- who declined an invitation to speak at this week's Conservative Political Action Conference meeting in Florida -- to be more visible in the months to come.

Pence, who once chaired the Republican Study Committee when he was a member of the House, told the lawmakers that the current political dynamic is akin to 2009, when Democrats controlled both chambers of Congress and the White House.

"He talked about how in 2009, the new Democrat President, Democrat House, Democrat Senate -- how similar that moment was to this moment," Banks said. "A massive spending deal Democrats pushed in 2009 that overreached, every single [House] Republican voted against in 2009. That sure looks like the $1.9 trillion bill that's on the floor this week."

Banks added: "The more Democrats overreach, the more likely we are going to have a 2010 type midterm to win back the majority. He sort of senses the similarity in that moment to this moment."