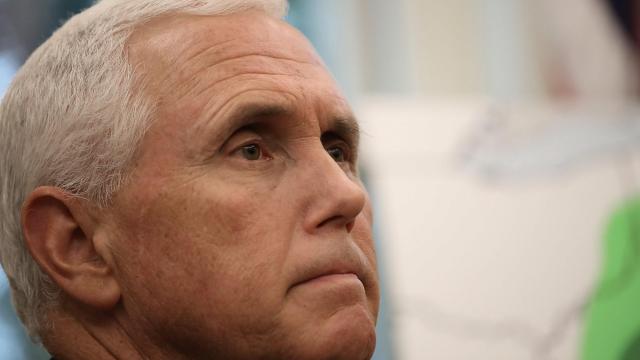 (CNN) — Vice President Mike Pence on Tuesday misleadingly cited some statistics about illegal entry to the US in an effort to build support for the Trump administration's border wall by tying the issue of immigration to fears of terrorism and crime.

In an interview on ABC's "Good Morning America," Pence was asked about a statistic, misleadingly cited by White House press secretary Sarah Sanders, that 4,000 "known or suspected terrorists" were caught trying to enter the US illegally as part of the administration's push for greater security at the southern border. Although the Department of Homeland Security has said 3,755 individuals the Department of Homeland Security has cited as "known or suspected terrorists" were prevented from traveling to or entering the US in fiscal year 2017, the vast majority of those people attempted to enter by air or legal ports of entry elsewhere.

The data concerns individuals attempting to travel to the US by air, sea or land, and includes those who made efforts to obtain visas from embassies and consulates around the world. In July 2017, the State Department said there was "no credible information that any member of a terrorist group has traveled through Mexico to gain access to the United States."

The administration's suggestion that tighter southern border security is needed to stop thousands of terrorists stands in contrast to the government's own statistics on the issue. According to a senior administration official familiar with Customs and Border Protection data, roughly a dozen individuals who are not US citizens and are on the terror watchlist were encountered on the southern border between October 2017 and October 2018.

"The White House said 4,000 terrorists coming to our country. That's not true," ABC's Jon Karl asked Pence, pressing the vice president on how Americans could trust the administration on this issue given the myriad misstatements they've made.

"Four thousand known or suspected terrorists were apprehended attempting to come into the United States through various means in the last year," Pence replied, correctly referring to the statistic but continuing to make the administration's overall point that a border wall is needed to ensure safety.

"Overwhelmingly at airports, not at the border," Karl said.

A White House official followed up later Tuesday to define "special interest individuals" as those with "fake passports," "suspicious travel patterns" or who come "from terrorist hotspots," among other reasons, when attempting to breach the border.

Juliette Kayyem, a DHS assistant secretary in the Obama administration and a CNN national security analyst, has said there are more special interest countries than the State Department's list of officially designated states that "promote or have a tendency to promote terrorism."

Pence, in his interview with Karl, also offered somewhat misleading statistics about the severity of criminals and drugs entering the US.

Customs and Border Protection data counted nearly 17,000 criminal aliens "encountered" by the Office of Field Operations and the Border Patrol in fiscal year 2018. But it should be noted that large portions of the immigrants being arrested at the southern border committed nonviolent crimes, like illegal entry or re-entry -- the act of crossing into the US illegally -- and driving under the influence of alcohol. Customs and Border Protection statistics also measure immigrants convicted of crimes in the US or abroad.

And regarding the amount of heroin that pours into the US, Pence is correct that it largely comes through Mexico, but a recent Drug Enforcement Administration report found that the majority of it comes via legal ports of entry.

President Donald Trump is scheduled to address the nation Tuesday night to discuss what the administration has called a "crisis" at the southern border. The government has partially shut down over a budget impasse between Democrats and Republicans over whether to fund Trump's demand for a border wall.

CORRECTION: This story has been updated to contextualize and more accurately reflect Pence's comments about the administration's previous misleading claims to justify a southern border wall and to correct a reference to the Drug Enforcement Administration. The story has also been updated to clarify that the roughly dozen individuals encountered at the border on the terror watchlist were non-US citizens.