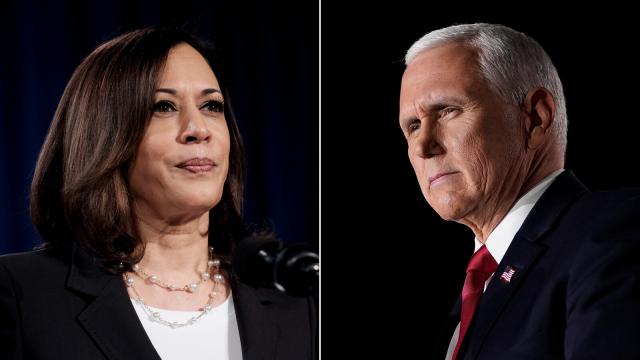 CNN — Vice President Mike Pence and Sen. Kamala Harris presented two sharply different representations of the administration's handling of the Covid-19 pandemic in Wednesday's debate, as the California senator accused the Trump administration of misleading Americans and framed the election as a referendum on trust.

The two vice presidential candidates met in Salt Lake City for a civil and substantive debate that stood in sharp contrast with last week's fiasco that was driven by President Donald Trump's impetuous interruptions. Though Pence would have preferred to talk about other topics, the President's Covid-19 diagnosis and the widening circle of infected aides in the White House made the administration's handling of the pandemic the central issue in the campaign and Wednesday night's debate.

The virus is still one of the top issues on the minds of Americans, who are already voting less than a month before Election Day. In recent days, Trump has slid even further behind Biden in the polls -- a nationwide CNN poll released Tuesday showed the President trailing his opponent by 16 points -- as Americans recoil from his erratic behavior and his disregard for the dangers of the virus.

In the opening minutes of the debate, Harris -- 12 feet from Pence and shielded by plexiglass --delivered a swift condemnation of the Trump administration's handling of the coronavirus pandemic, noting that some 210,000 people have died and more than 7.5 million people have contracted the disease.

"The American people have witnessed what is the greatest failure of any presidential administration in the history of our country," Harris said, arguing that Trump had treated Covid-19 as a hoax as he repeatedly minimized the seriousness of the virus, while discouraging people from wearing masks.

"One-in-five businesses closed. We're looking at front line workers who have been treated like sacrificial workers. We're looking at over 30 million people who in the last several months had to file for unemployment," Harris said.

At the end of January, she said, the President and the vice president were informed about the lethal nature of the pandemic and that it was airborne, alluding to reporting from legendary reporter Bob Woodward.

"They knew what was happening, and they didn't tell you," Harris said. "They knew and they covered it up."

On multiple occasions, the vice president attempted to defend his boss while ignoring his record on key points. Pence attempted to pitch Trump as having crafted a strong economy without acknowledging its collapse in the last several months; touted his ability to craft international peace agreements, particularly regarding Israel and the Middle East, while ignoring growing American isolation from her traditional allies abroad. He also played up Trump's stance on trade while the country's trade deficit is at its highest point in 14 years.

Harris forced Pence to defend Trump's time in office early and often in the debate, pressing him on the economy, trade deals, climate change and health care in addition to the coronavirus response.

Pence was on defense as he tried to argue that the administration had managed the virus to the best of its ability, giving substantial aid to states as they rushed to fight Covid-19.

"Our nation has gone through a very challenging time this year," Pence acknowledged Wednesday night. "But I want the American people to know it from the very first day, President Donald Trump has put the health of America first."

He praised the President's ban on Chinese foreign nationals entering the United States early this year as the virus began to spread, which he said Biden criticized at the time as xenophobic. That move, Pence argued, bought the nation "invaluable time to stand up the greatest national mobilization since World War II."

"I believe it saved hundreds of thousands of American lives because with that time we were able to reinvent testing," Pence said. He then accused Biden of stealing ideas from Trump's approach to fighting the virus for his own plan.

"When I look at their plan that talks about advancing testing, creating new PPE, developing a vaccine, it looks a little bit like plagiarism, which is something Joe Biden knows a little bit about," Pence said, in a reference to the plagiarism scandal that ended Biden's presidential campaign in 1988.

Pence accused Harris of being part of an effort to play politics with the potential vaccine, because Democrats have said that they do not trust Trump, who they believe is trying to accelerate approvals for the vaccine to conform with his reelection timeline.

"You continue to undermine public confidence in a vaccine," Pence said to Harris, noting she has questioned the safety of a potential coronavirus vaccine because she feels Trump has politicized the speed of vaccine production. "Stop playing politics with people's lives."

It was a brazen line given that the President himself frequently lies and has admitted to downplaying the coronavirus.

Harris argued that because the election is underway, Republicans should not attempt to confirm a replacement for the late Justice Ruth Bader Ginsburg. Trump has nominated Judge Amy Coney Barrett, who appears to have a clear path to the seat if Republicans can hew to their scheduled timeline of confirming her by the end of the year.

But Pence repeatedly pressed Harris on whether the Democrats would try to increase the size of the Supreme Court from its current nine members if Barrett is confirmed.

"If you haven't figured it out yet, they are going to pack the Supreme Court if they win the election," Pence said.

Harris changed the subject to the lack of diversity in Trump's nominees to the court and her view that confirmation of Barrett would subvert the will of Americans at a time when they are already voting.

"I just want the record to reflect she never answered the question," Pence said, getting the last word in the exchange.

The two candidates also sparred over health care when Harris noted that the Affordable Care Act could be struck down by the Supreme Court, which will hear oral arguments in a case against the law a week after the election.

Harris argued that the law will be even more endangered, including the provision protecting Americans with pre-existing conditions, if Trump's Supreme Court nominee Amy Coney Barrett is confirmed, cementing a 6-3 conservative majority.

Pence -- ignoring the fact that Trump routinely dispenses falsehoods and conspiracy theories during his speeches, briefings and events -- accused Harris of being untruthful when she told voters that if they had a pre-existing health condition "they are coming for you."

The vice president also doubled down on Trump's lies about voter fraud in the current election cycle -- and he avoided committing to a peaceful transfer of power, much as Trump did in the first presidential debate last week, insisting that it must be a "free and fair election."

When asked what he would do if Trump refused to accept the outcome of the election, Pence dodged by saying he believes Trump will win in November, and he tried to shift the blame for the debate over the will of the voters to Democrats.

"When you talk about accepting the outcome of the election, I must tell you, senator, your party has spent the last three-and-a-half years trying to overturn the results of the last election. It's amazing," Pence said before launching into attacks on the Russia investigation and the Ukraine investigation that led to Trump's impeachment last year.

"I think we're going to win this election, President Trump and I are fighting every day in courthouses to prevent Joe Biden and Kamala Harris from changing the rules and creating a massive opportunity for voter fraud," Pence said. "If we have a free and fair election, we'll have confidence in it."

Pence often on defense over Trump

Harris frequently pressed Pence on the controversies of Trump's administration, including the recent revelations over his taxes. She turned a question about the transparency of Trump's health records following his coronavirus diagnosis into a swipe at Trump's failure to pay federal income taxes in 10 of 15 recent years and for paying only $750 in 2016 and 2017 each.

"It would be really good to know who the President of the United States, the commander in chief, owes money to," she said.

Pence shook his head and asserted that the President had said those reports are "not accurate." He also claimed that Trump has paid tens of millions of dollars in taxes and released "stacks" of financial disclosure forms.

The vice president argued that Trump's experience in the corporate world had helped build an economy that was roaring before the pandemic hit.

He also attacked Biden's economic policies, and said that he would raise taxes on working Americans that would harm the nation's economic recovery. He defended the coronavirus aid that was approved by Congress in partnership with the White House, saying, "We literally have spared no expense to help the American people and the American worker through this." That statement came a day after Trump killed negotiations over the next round of coronavirus stimulus money in a tweet.

"You lost that trade war," Harris said, accusing the administration of shedding 300,000 manufacturing jobs and pitching farmers into bankruptcy.

Pence jumped at an opening, hitting Biden over his vote as a senator to approve permanent normal trading relations with China, which opened the way for the Asian giant to join the World Trade Organization and subsequently to an explosion in its economic development.

"Lost the trade war with China? Joe Biden never fought it. Joe Biden has been a cheerleader for China for the last several decades," Pence said.

This story and its headline have been updated with additional developments on Wednesday.