Peloton shares slip, then recover, after report of possible new competition from Apple 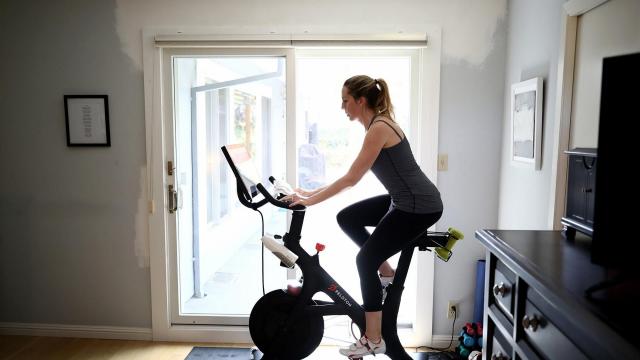 CNN — Peloton may soon have to face Apple as a new competitor, and investors don't like it.

Shares of Peloton, the trendy at-home fitness service that streams classes to a spin bike or treadmill, fell more than 4% in premarket trading Thursday. But the stock rebounded, and with an hour left in the regular session, the stock was trading 1.2% higher.

The initial drop came after Bloomberg reported Apple is working on a subscription project that would include offering streaming fitness classes to Apple devices, including its phones and TV service. Apple declined to comment to CNN Business.

The broad strokes of the plan echo products from Peloton and Nike, which offer streaming classes for at a monthly price that is typically lower than an old-fashioned gym membership.

It's become an especially hot field, as people have been flocking to at-home fitness classes during the coronavirus pandemic that has forced temporary gym closures across the United States.

That's been a boon for Peloton, and its stock. Shares are up more than 120% this year thanks to a surge in sales for its bikes and treadmills, which have garnered such ardent fans that it's sometimes called "cultish."

The Bloomberg report said fitness classes are just one part of Apple's plans, which reportedly also include "Apple One," a family of bundles that will let people subscribe to its digital services at a lower monthly price then if they bought them separately.

Apple is reportedly mulling a variety of packages, including a basic Apple Music and Apple TV+ bundle. From there, the company could potentially add on subscriptions to its gaming and news apps, or even extra cloud storage.

Services have been a growing sector for Apple. In its most recent earnings report from July, CEO Tim Cook said the company had reached "all-time revenue records" for the App Store, Apple Music, video and cloud services. Its overall services revenue jumped 15% from the previous year to $13.2 billion.