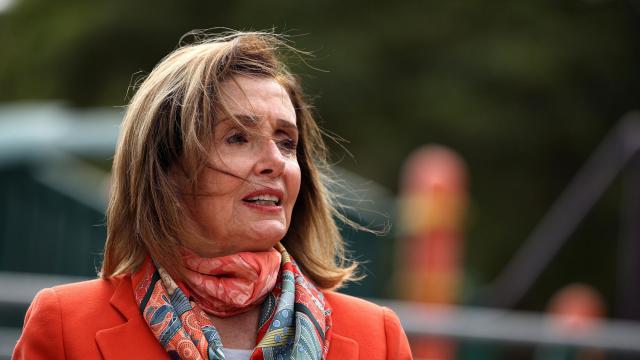 CNN — House Speaker Nancy Pelosi said Sunday that President Donald Trump is in a "hurry" to confirm his Supreme Court nominee so that the conservative jurist can participate in a highly consequential Obamacare case the court is set to hear days after the election.

"What I am concerned about is anyone that President Trump would have appointed was there to undo the Affordable Care Act. That is why he was in such a hurry, so he could have someone in place for the oral arguments, which begin November 10," Pelosi told CNN's Jake Tapper on "State of the Union."

"And it doesn't matter what the process is here -- what matters is what it means personally to the American people," Pelosi said, before listing a number of things she said were at stake if Obamacare was struck down by the high court.

On Saturday, Trump nominated Amy Coney Barrett to become the next Supreme Court justice, angering top Democrats including Pelosi and Senate Minority Speaker Chuck Schumer, who warned that the nomination could jeopardize access to health care and threaten other consequential policy issues that could come before the high court. If confirmed, Barrett would help solidify a 6-3 conservative majority at the court.

Asked by Tapper if she was concerned the potential 6-3 conservative majority court could also overturn the landmark 1973 Roe v. Wade decision, Pelosi said her current concern rests with the fate of the healthcare law, which she helped pass 10 years ago.

The push to confirm a Supreme Court justice ahead of the November 3 election would put the Senate on track for one of the quickest confirmations in modern history.

Barrett, who is currently a judge on the 7th US Circuit Court of Appeals, provided insight into her thoughts on the ACA in an early 2017 law review essay in which she reviewed a book related to the Supreme Court ruling on the law, criticizing Chief Justice John Roberts' rationale that saved the legislation in 2012.

"Chief Justice Roberts pushed the Affordable Care Act beyond its plausible meaning to save the statute," Barrett wrote. "He construed the penalty imposed on those without health insurance as a tax, which permitted him to sustain the statute as a valid exercise of the taxing power."

At another point, Barrett refers to "Roberts' devotion to constitutional avoidance."

The case the justices are set to hear following the election was brought by a coalition of Republican state attorneys general and the Trump administration, who argue the law's individual mandate is unconstitutional, and the entire law must fall.

This story has been updated with more details.