Pelosi’s Strategy in Secret Ballot: Allow Her Critics to Let Off Steam 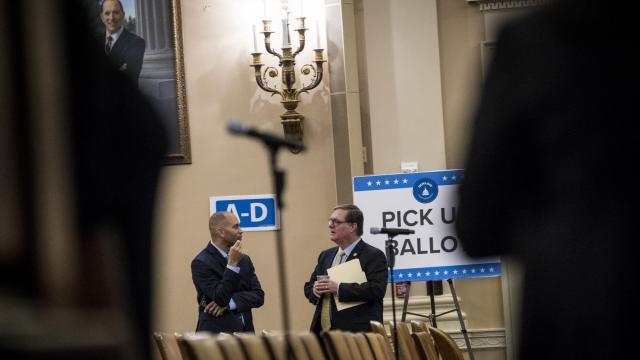 Going into a closed-door election among Democrats this week, Nancy Pelosi knew she had locked up support from the vast majority of her colleagues to become her party’s nominee for speaker of the House.

She was unopposed, after all; the vote was a mere formality.

But Pelosi, a shrewd strategist who is always looking toward her next move (or several), offered Democrats a choice anyway. Her team designed an awkward-looking paper ballot, printed in giant type, that gave Democrats a chance to register their opposition to her by checking a box that said “no.”

The unorthodox ballot was a small but illustrative piece of Pelosi’s strategy for avoiding a divisive floor fight over the speakership that could tarnish Democrats just as they begin their new House majority. It was part of a bid to let some steam out of the pressure cooker of her opposition — a small but vocal group that has insisted she must step aside to usher in an era of change — and continue her laborious push to win over critics before a far more consequential vote to formally elect a speaker when the new Congress convenes in January.

The effort plays to the strengths of Pelosi, a veteran legislator and negotiator who does not shrink from a challenge, and few expect her to fail. But it is not her style to take the result for granted.

“Seriously, and very purposely, and doggedly,” were the words Rep. Ed Perlmutter of Colorado used to describe Pelosi’s approach to winning over her opponents. A day after he ticked the “no” box on his secret ballot, Perlmutter said on Thursday that he was in active conversations with Pelosi and was open to supporting her for speaker in January.

The paper ballot was meant to give lawmakers who opposed Pelosi, particularly newly elected members who had promised during their campaigns not to back her, a chance to cast a protest vote, and potentially room to change course before the January vote.

It was the latest iteration of Pelosi’s campaign-trail exhortation to Democratic candidates to “just win, baby” — her swaggering way of saying they should do whatever they had to to protect the party’s chances of winning the majority, even if that meant breaking with her personally.

The yes-or-no choice also gave Pelosi, who is renowned for her vote-counting talents, a clear sense of how much work she had ahead to secure the support necessary to regain the speakership.

Thirty-two Democrats checked the “no” box in Wednesday’s balloting, while 203 voted for her, a result that was simultaneously a resounding endorsement of Pelosi’s nomination as speaker and an indication that she would indeed have to change more minds to win. To be elected, her name must be uttered by a majority of representatives present and voting on the House floor on Jan. 3 — as many as 218. That would mean she could afford no more than 16 defections.

“The members that voted no, or the three that voted by not voting, expressed themselves in caucus, and now they have a choice between Kevin McCarthy and Nancy Pelosi, and I think for anybody, no matter what sort of Democrat they are, that’s a pretty easy choice,” said Rep. Dan Kildee of Michigan, an ally of Pelosi. He was referring to the fact that Republicans are expected to name the incoming minority leader when the roll call for speaker unfolds, as is traditional for the party in the minority.

Pelosi has spent much of her time since Election Day systematically chipping away at her opposition, and that is how she spent the hours immediately before and after Wednesday’s vote. She cut deals with a group of centrist lawmakers on changing House rules to allow more consideration for bipartisan bills, and met with critics who had said they would vote against her.

Rep. Stephen F. Lynch of Massachusetts — one of 16 signers, along with Perlmutter, of a letter calling for new leadership — attended two such sessions with Pelosi on Wednesday, and on Thursday evening said he had secured unspecified “concessions” that made him comfortable supporting her for speaker. “I’m not going to say what we actually agreed upon, but we agreed on a set of values that were in harmony with the things that we care about,” said Lynch, who mentioned an infrastructure package and pension changes as common priorities. “I’ll leave it at that, because I know she’s still got to sit down and talk to 13, 14 more members to get to 218.”

With the caucus vote behind them, Lynch said, those who oppose Pelosi have a steeper task to persuade colleagues that blocking her ascent would be worthwhile.

“In a way, we’re pushing against human nature, because now that we have the majority, members are energized and hopeful, and they have something to lose here,” Lynch said. “Many members, including myself, don’t want to mess this up.”

After a tense and unproductive meeting on Wednesday with Pelosi, the three lawmakers who put together the letter opposing her did not appear to have a plan to ensure that they would have the votes to stop her in a floor fight, and were still searching for a candidate willing to directly challenge her.

“We’re not meeting with anybody,” said Rep. Tim Ryan of Ohio, who challenged Pelosi in 2016 for the minority leader post and garnered 63 votes, almost twice the number who opposed her on Wednesday. “All we’re saying now is everybody needs to vote their district, vote their conscience, and let the chips fall where they may.”

That will not be the approach of Pelosi, who has been working quietly behind the scenes to court skeptics and opponents by wielding a considerable arsenal of sweeteners, including her ability to dole out committee assignments, to set the legislative agenda to ensure certain policy issues are made priorities, and to select point people for high-profile efforts.

She is cognizant of the fact that many newly elected lawmakers feel that they must oppose her as a matter of political survival, given her demonization by critics as a symbol of runaway liberalism. But she has focused intently on cutting deals with incumbents to bring them over to her side. Rep. Gerald E. Connolly of Virginia, an ally of Pelosi, said Democrats had been toiling to figure out a way to allow those who felt they must oppose Pelosi for speaker to satisfy that need without leading to a damaging spectacle at the very moment that Democrats assume control of the House for the first time in eight years.

He even floated the idea of scrapping the secret ballot, a tradition in which party caucuses meet behind closed doors to elect their leaders, so that Democrats who had promised to vote against Pelosi could fulfill their pledge by doing so out loud in front of their colleagues — and then rally to her side during the official vote of the House in January. But Democrats balked at the change.

“We’re all trying to avoid a bloody fight on the floor,” Connolly said. But he added that Pelosi’s yes-or-no ballot yielded the same general result, allowing Democrats to cast a protest vote, and even take a picture of it to show constituents.

“That lets some of the steam out and allows people to feel better about the process,” he said.

It was not enough for many critics of Pelosi who said there was little she could do to win them over.

“We’ve still got a month to go, and I think she has a math problem getting to 218,” said Rep. Ron Kind of Wisconsin, who voted against her on Wednesday and said he would again in January. “I’m not in the game of trade-offs or I need this or that. I don’t play that game at all.”

If Pelosi is interested in “peeling off” the votes she needs, Kind added, “she’s probably better off burning up the phone lines with other members.”

As of Thursday evening, that was just what she was doing.