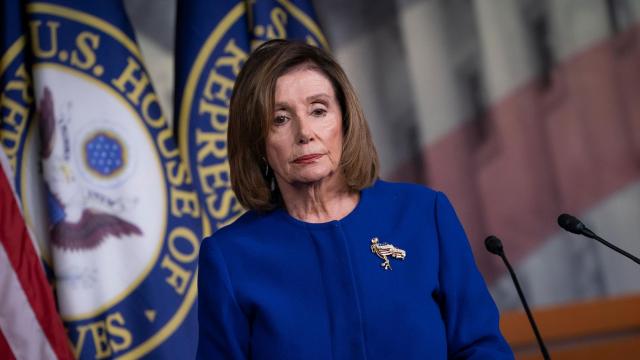 CNN — Speaker Nancy Pelosi indicated that that the House will vote Wednesday on a resolution to name the impeachment managers for the Senate trial of President Donald Trump and transmit the articles to the chamber, two sources told CNN on Tuesday.

Pelosi told her Democratic colleagues Tuesday morning at a closed-door meeting on Capitol Hill that she won't announce impeachment managers during that meeting, according to a source familiar with the remarks. Last week, Pelosi told Democrats she planned to discuss plans for sending over the articles of impeachment, which she's held following a vote last month.

House Majority Leader Steny Hoyer said on Monday night that the House vote to name the impeachment managers "could be" on Wednesday, adding that the Senate has "practical problems" if they were to move sooner since three Democratic senators are participating in the presidential debate.

After a several week delay to formally send the articles, Pelosi's move will kick the impeachment fight officially into the Senate's court, where Senate Majority Leader Mitch McConnell is readying a resolution of his own to set out the rules of the trial.

McConnell would not provide Pelosi with the planned rules for the trial as she had requested before she sent over the articles, saying that the House would not dictate how the Senate is run. On Monday, McConnell said Pelosi's "strange gambit has achieved absolutely nothing."

But Democrats argue Pelosi's decision to withhold the impeachment articles for nearly a month helped push the conversation about whether the Senate trial should include witnesses like former national security adviser John Bolton, who said last week he would testify if subpoenaed.

Pelosi has continued to keep her plans on impeachment close to the vest, and lawmakers who could be tapped as managers on Monday said they were in the dark about who will be appointed by the speaker.

There are two Democrats widely expected to be included: House Intelligence Chairman Adam Schiff, who led the House's impeachment inquiry, and House Judiciary Chairman Jerry Nadler, whose committee approved the two articles of impeachment that the House passed last month.

Once the articles are formally sent to the Senate, the chamber is expected to kick off the opening of the trial with the swearing in of all 100 senators. The substance of the trial, however, is not expected to begin until next week.

The White House is also readying its defense of the President, including a push for the Senate to include the option of moving to swiftly dismiss the charges against the President in the rules of the Senate's impeachment resolution, a motion that would require 51 votes and would end the trial.

But a motion to dismiss may not be included in the impeachment rules resolution, because that vote could put Republicans up for reelection in a difficult spot and McConnell does not have the 51 votes needed to approve it early in the trial.

"I think I am safe in saying there is almost no interest in a motion to dismiss," said Sen. Roy Blunt, a Missouri Republican, who is not up for reelection in 2020.

South Dakota Sen. John Thune, the Republican whip, warned there are still "some things that are being nailed down," and he said he'd know "soon" if a motion to dismiss among other things would be included in the resolution.

But many in Senate Republican leadership have made the case that including the House firebrands will not help the President because they won't appeal to the Senate Republican moderates who will be key to deciding how the trial progresses -- and whether there will be any witnesses called.

"My advice to him would be: Let's not infect the Senate trial with the circus-like atmosphere of the House," said Sen. John Cornyn, a Texas Republican. "And I think there would be an increased risk of doing that if you start inviting House members to come over to the Senate and try the case."