Pelosi and Trump Agree on Something: She Should Be Speaker 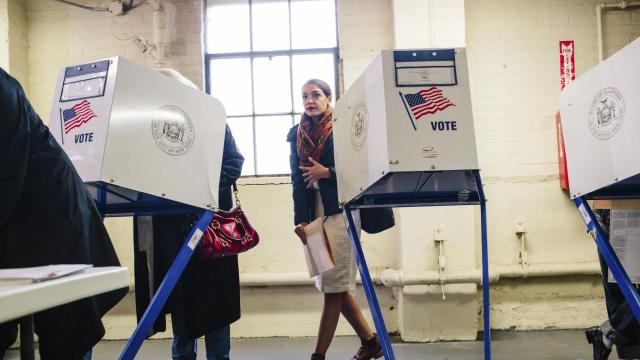 WASHINGTON — Rep. Nancy Pelosi of California, the highest-ranking House Democrat, declared on Wednesday that she was confident that her newly ascendant colleagues would elect her speaker, as she moved aggressively to hold off a challenge to her leadership that could fracture the party.

The day after midterm elections that handed her party control of the House, Pelosi curtly brushed aside questions about whether she was convinced she would continue to lead her caucus — “Yes, I am,” she said — even as other Democrats jockeyed for position. Republicans, after stinging losses, braced for a leadership battle of their own.

The maneuverings were the first signs of potentially bruising battles over the direction of both parties in a new era of divided government, in which Democrats and Republicans will both face internal struggles to define their messages and their tactics. Democrats faced immediate decisions on how aggressively, and where, to use their oversight powers to investigate President Donald Trump and his administration, and how far to go in seeking compromise or confrontation with a commander-in-chief who has labeled them sworn enemies.

Trump began the day offering Pelosi an early, if unusual, endorsement on Twitter. In a backhanded compliment to an adversary he relishes attacking, he later said during a formal postelection news conference that he would even supply her with Republican votes to win the speakership if there was not sufficient support among Democrats to elect her.

“I think she deserves it,” Trump said. “She’s fought long and hard, she’s a very capable person, and you know, you have other people shooting at her trying to take over the speakership.”

Pelosi, fresh off midterm election wins that her allies believe have cemented her hold on the top position, said the president was right about her fitness for the job, but for the wrong reasons.

“I don’t think anybody deserves anything — it’s not about what you have done, it’s what you can do,” Pelosi said at a news conference at the Capitol. “And I think I’m the best person to go forward, to unify, to negotiate.”

Still, Democrats do face consequential choices about their leadership as a new, more diverse and younger majority prepares to take over.

Pelosi, 78, has exuded confidence that her colleagues would choose her to resume her tenure as the first female speaker of the House, and whispers that she would face a serious challenge appear to have dissipated.

Behind the scenes on Wednesday, she began the process of gathering the votes she needs to hold off any rebellion, making telephone calls to Democratic lawmakers to secure their support, according to a senior Democratic aide. She spent Wednesday night in her Capitol office hand-writing personalized messages to each Democratic lawmaker in which she solicited their support “with confidence and humility.”

“We must show on the first day of the 116th Congress that we are prepared to get the job done for the American people,” she wrote.

Rep. Henry Cuellar, D-Texas, who is supporting Pelosi for speaker, said that “with victory on your side, it always helps a lot.” But he and other more centrist members of the party in the House will insist on changes to ensure they have a voice in legislating and policymaking.

Pelosi said on Wednesday that she would put forward new rules that would ensure “openness and transparency” in the way the House runs.

“Our newcomers will be part of putting together how our agenda goes forward,” she said.

Some of the Democratic candidates most outspoken about opposing her speakership lost on Tuesday, such as Richard Ojeda in West Virginia and Dan McCready in North Carolina. But others won, including Abigail Spanberger in Virginia — who a spokesman said on Wednesday had not changed her position that Pelosi should not be speaker — and Joe Cunningham in South Carolina.

“There is no chance he will vote for Pelosi,” Tyler Jones, Cunningham’s spokesman, said on Wednesday. “He will keep his promise.”

Rep. Steny H. Hoyer, D-Md., said Tuesday night that he planned to run for majority leader, the No. 2 position in the House, while Rep. James Clyburn of South Carolina plans to run for whip, the No. 3 post. That lineup would keep the top three positions of the current septuagenarian triumvirate — with none of the youthful sheen of the incoming class.

Members of the Congressional Black Caucus have said they want one of their own to be considered for any vacancy in the top two positions. But no one has come forward to challenge Pelosi or Hoyer.

Rep. Hakeem Jeffries of New York, who is viewed as a rising star, has told lawmakers he is likely to run for Democratic caucus chairman against Reps. Linda T. Sánchez and Barbara Lee, both of California, a contest that could pit two of Democrats’ geographic strongholds against each other.

“We have won the majority, and now we must keep the majority,” Jeffries, 48, said in an interview on Wednesday. But, he added, the Democrats must “avoid an unnecessary family feud about leadership aspirations.”

Clyburn, who is black, said on Tuesday night that he believed Pelosi would stay in the top position, with Hoyer second in line, and “hopefully” himself third. He said he expected to see more African-Americans in other leadership positions, arguing that the newer members would accept such a result.

“I’ve been campaigning for all of these people — I talk to them all the time,” Clyburn said. “I was on the phone with a lot of them today — I’m talking about 30-something-year-olds. I don’t have any problem with them.” Rep. Diana DeGette of Colorado said on Wednesday that she would challenge Clyburn, but she is not expected to topple him, particularly given his base of support in the Black Caucus. DeGette, who has been the chief deputy whip for more than a decade, said in an interview that she did not “intend to have a messy leadership race.”

Rep. Ben Ray Luján of New Mexico, the triumphant chairman of the Democratic Congressional Campaign Committee, announced on Wednesday that he would seek the post of assistant majority leader, the No. 4 job, which is already being pursued by David Cicilline of Rhode Island and Cheri Bustos of Illinois.

Republicans were also grappling for power. Rep. Jim Jordan of Ohio, founder of the hard-right Freedom Caucus, announced that he would seek the post of minority leader, pitting him against Rep. Kevin McCarthy of California, the current No. 2 Republican.

In an interview with The Hill on Wednesday, Jordan placed the blame for Republican losses in the House at the feet of the leaders, suggesting they had not been conservative enough or sufficiently willing to bulldoze Democratic opposition to muscle through Trump’s top priorities such as repealing the Affordable Care Act, building a huge border wall or cutting welfare. He spent Wednesday dialing fellow Republicans to make his case.

McCarthy defended his tenure, telling House Republicans in a letter that the party had enjoyed “great gains,” including tax cuts and a reduction in federal regulations.

Rep. Steve Scalise of Louisiana said he would run for whip, the No. 2 spot, ending speculation that he might challenge McCarthy. Rep. Liz Cheney of Wyoming announced she would seek the job of Republican conference chairwoman, setting up a likely showdown with the current chairwoman, Rep. Cathy McMorris-Rodgers of Washington. The maneuvering among top Democrats was quieter. Hoyer has begun collecting signatures from allies for a letter highlighting his experience, his ability to take on Trump, and the steps he has taken to advance younger members on his whip team, according to two Democrats familiar with the effort.

As of Wednesday, several lawmakers said they did not expect a serious head-to-head challenge against Pelosi to emerge, but it was still far from certain whether she would have the 218 votes needed to win the speakership. A shrewd vote-counter, Pelosi would be unlikely to let such a fight play out in the House chamber without being certain that she would win; if she determined that she could not, several lawmakers said they expected a scramble to replace her.

Still, allies and adversaries alike noted that a newly empowered Pelosi had a formidable arsenal of potential sweeteners to offer rank-and-file members who might not be inclined to support her, including prime office space, positions on plum committees and money for staff members — all valuable currency on Capitol Hill.