David Pecker, chief of National Enquirer's publisher, is said to get immunity in Trump inquiry 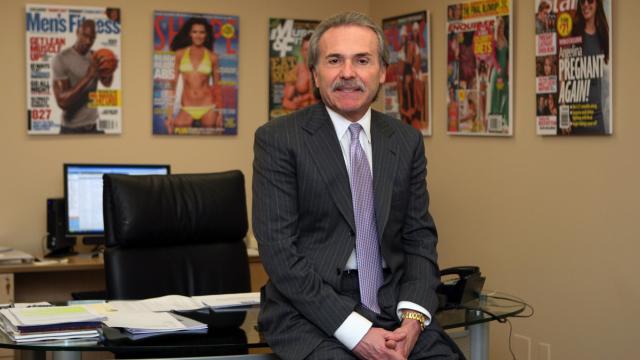 Federal prosecutors reached an immunity deal with tabloid executive David Pecker, a key witness in their monthslong investigation into payments during the 2016 presidential campaign to two women who said they had affairs with Donald Trump, according to two people familiar with the investigation.

Pecker is chairman of American Media Inc., the nation’s biggest tabloid news publisher, which was involved in the payments. Prosecutors have identified those payments as illegal contributions made in violation of campaign finance law.

As prosecutors in New York built a case against Michael Cohen, Trump’s longtime lawyer, that resulted in a guilty plea Tuesday, Pecker emerged as an important figure. The investigation appears to be continuing, and as a longtime friend and ally of Trump, Pecker could have additional information valuable to prosecutors.

In pleading guilty to campaign finance violations, Cohen said Trump directed him to arrange the hush money payments to protect Trump from embarrassing stories during the campaign. The cooperation of Pecker is another potential blow to the president from a former loyalist.

It was unclear Thursday whether prosecutors had granted Pecker immunity for his involvement in the illegal campaign contributions, or simply agreed not to use against him the information he provided. One of the people briefed on the matter cautioned Pecker could still face scrutiny. The agreement was disclosed Thursday by The Hive, a Vanity Fair site.

Court documents included detailed descriptions of Cohen’s interactions with American Media as the hush money payments to the women — a pornographic film star and a former Playboy model — were arranged.

It was unclear where prosecutors might be taking their investigation. Court papers said that several other people — in Trump’s presidential campaign and executives at the Trump Organization — were involved or knew of the illegal payments. Cohen, under oath in court, said Trump directed him to make the payments.

Pecker has been close to Trump since the 1990s, and has served as a protector dating back to before the days when Trump was the host of his reality show, “The Apprentice.” After Trump became president, he rewarded Pecker’s loyalty with a White House dinner to which the media executive brought a guest with important ties to the royals in Saudi Arabia. At the time, Pecker was pursuing business there while also hunting for financing for acquisitions, The New York Times reported in March.

The prosecutors’ agreement with Pecker adds another twist to a highly unusual case implicating the president. It means that a company that operates as a news organization is cooperating with federal authorities in an investigation that involves its work with a campaign.

Federal prosecutors determined that in American Media’s work with Cohen — and for Trump’s candidacy, according to Cohen — the company operated in more of a supportive political function for Trump, The Times reported in July.

And when officials subpoenaed the company in April, its executives decided against fighting it, agreeing to cooperate where warranted, and where they deemed officials were not violating First Amendment rights.

The company’s cooperation has provided prosecutors with a second line of access to communications about the effort to protect Trump’s secrets involving women during the campaign, on top of the information provided by Cohen.

Though several people familiar with American Media’s operations have said that the company keeps a strict records policy that ensures emails are deleted regularly, it is not clear that the same held for encrypted communications or recordings. Dylan Howard, the company’s chief content officer, who is also said to be cooperating, was known to have a recording device in his office, according to people familiar with his operations. American Media would not comment.

In court documents filed Tuesday, federal prosecutors cited “encrypted” communications among ecker, Howard and Cohen regarding the payoff to Stephanie Clifford, the pornographic film actress known as Stormy Daniels, who claimed to have had a brief affair with Trump.

Among the records prosecutors subpoenaed in spring were communications between Pecker and Howard. According to the court documents made public this week, Pecker and Howard had been in touch with Cohen about both Karen McDougal, a former Playboy model who said she had a 10-month affair with Trump that began in 2006, and Clifford.

In June 2016, when McDougal approached American Media, whose tabloids include The National Enquirer, about selling her story, both Pecker and Howard provided Cohen a heads-up, prosecutors said.

American Media purchased the rights to McDougal’s story for $150,000 in August 2016 as part of a deal designed specifically to suppress information of the affair, according to Cohen. As the presidential election neared, Cohen sought to buy those rights from American Media executives, prosecutors revealed, though the transaction was never completed.

While Cohen went on to negotiate directly for Clifford’s silence about Trump, she, too, had initially considered selling her story to the media. Upon learning that, American Media alerted Cohen and then helped him arrange his own deal to pay Clifford $130,000 for her silence in the final days of the 2016 campaign.

Pecker and Howard did not respond to requests for comment. Depending on how far the immunity agreement goes, it gives American Media some breathing room in an investigation that has posed a serious legal threat to the company, which filed for bankruptcy in 2010. This year, the company notably expanded its portfolio, buying up more than a dozen titles that included In Touch and Life & Style magazines.

In bringing their charges against Cohen this week, prosecutors defined American Media’s payment to McDougal as an illegal, coordinated campaign expenditure. Election law prohibits corporations from spending money to influence elections in conjunction with candidates or their representatives.

“He reminded us,” Robert S. Khuzami, deputy U.S. attorney for the Southern District of New York, said of Cohen when he announced the charges in Manhattan this week, “that it is illegal for corporations to make contributions to candidates.”