Raleigh, N.C. — When Gov. Pat McCrory wrote to welcome teachers back to the classroom, he touted a "substantial" pay raise that amounted to "an average pay increase of 5.5 percent for teachers."

That might have been exciting news, except that legislative leaders have been touting a 7 percent average pay raise for more than a month. House Speaker Thom Tillis trumpets that 7 percent figure as "simple math" in a recent campaign ad for his U.S. Senate campaign.

For educators like Michelle Pettey, a first-grade teacher at Brier Creek Elementary School in Raleigh, that "simple math" doesn't add up; 5.5 percent doesn't equal 7 percent, and neither number matches the smaller-than-expected bump that showed up in her first paycheck of the year.

"No teacher can figure out what happened," said Pettey, a teacher with 16 years in the classroom who said her actual raise worked out to be something like 1.39 percent over last year's salary.

The single mother whose own children are in the school system says she has friends outside the profession who ask her why teachers are complaining about a 7 percent raise.

"I tell them, 'That's what they want you to think, but that's only an average. It's different for everyone,'" she said Monday afternoon between the end of her day working for the public school and a tutoring job that helps make ends meet.

The teacher pay raises lawmakers passed this summer have been tinged by politics and obscured by confusion ever since they were rolled out.

Part of that conflict stems from the fact that 7 percent – or 5.5 percent – is an average raise, but the actual amount a teacher received varies depending on how long he or she has been in the profession. Also, whatever the raise, it affects only the state-funded portion of a teacher salary, not any supplemental funding provided by local systems like Wake County.

But the governor, state House members and state senators have seemly contributed to the confusion by putting out different numbers – 5.5 percent versus 7 percent versus an even higher estimate of the average, depending on how it's calculated. All of those numbers oversell the raise for veteran teachers, says Rodney Ellis, president of the North Carolina Association of Educators, a teachers advocacy organization that has disputed the 7 percent number since it was unveiled.

"It's much less of a salary increase than what they've touted," Ellis said.

Even teachers who say they would like to give Republican leaders who control state government the benefit of the doubt point to the conflict between the governor's letter and legislative pronouncements about the pay raise with a measure of skepticism. 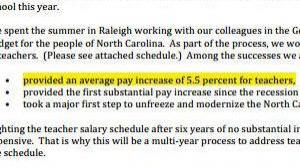 "If I'm being told one thing by one group and another thing by another group, I'm going to scratch my head," concedes Sen. Tom Apodaca, R-Henderson, the No. 2 leader in the state Senate.

Apodaca said that everything he's ever seen on the pay raise tells him its a 7 percent average hike, not the 5.5 percent raise listed by the governor.

"I don't know where the governor is getting his numbers," he said. "It wouldn't be the first time I didn't agree with what was coming out of the Governor's Office, and I'm sure it won't be the last."

In one respect, lawmakers and the governor are trying to say the same thing – that teachers got a substantial raise after years of seeing their pay stagnate. On top of that, a complicated 30-plus step seniority tier was revamped into six bands.

For a teacher entering the fifth or sixth year in the classroom, the 18.5 percent raise reflected in this month's paycheck probably exceeded expectations. Veteran teachers, such as one of Pettey's colleagues who has been in the classroom for something approaching 30 years, were less impressed with a raise that measured only a fraction of 1 percent.

Pettey said that, when she opened her own check and saw the mismatch between reality and expectations, "I sat down and cried."

On top of those individual variations, Pettey said, it doesn't seem that policymakers know exactly what it is they did in this year's budget when they can't even agree on the average amount of the raise.

Through the 2013-14 school year, veteran teachers have gotten longevity pay, a lump sum bonus for sticking with the profession paid on the anniversary of their hire. Even in lean times when teachers weren't getting pay raises, veteran educators continued to get longevity pay.

Backers of this year's pay raise said the new pay scale folds longevity pay into the system, meaning that teachers will see a boost in their paychecks throughout the year rather than in a lump sum. Teachers such as Pettey and advocates such as Ellis talk differently about that arrangement, saying they have essentially "lost" the extra pay, which they see as subsidizing pay boosts for younger teachers.

Either way, the governor's office says the new system gives teachers a 5.5 percent average raise if you don't count longevity. It only hits 7 percent, they said, once you fold longevity in.

Josh Ellis said that McCrory's letter could have been clearer by saying the raise was 5.5 percent on top of longevity, stressing that the governor and Tillis agree on the basic numbers.

It's worth noting that McCrory promised to veto any budget that contained a pay raise of more than 6 percent, a threat that the 5.5 percent number allows him to back away from.

"It's my understanding they are not including longevity," Dollar said. "The average of 7 percent does include rolling longevity into the calculation."

Both Dollar and the governor's spokesman say lawmakers and the governor want to move forward with more salary enhancements for teachers that would include bonuses for senior teachers like Pettey who agree to mentor younger educators and pay bumps for those who teach in-demand topics like science or in hard-to-staff schools.

Senate staffers, however, insist that this year's raise is 7 percent even without including longevity. They point to a document that seems to show the average teacher pay raise is 7 percent without figuring in longevity and say it would be even more if longevity pay were included.

"That's not accurate," the NCAE's Ellis said, insisting that the governor's 5.5 percent number is closer to the truth. "Those teachers who have been the stable workhorses of the system are the ones who are getting shortchanged."

While they duel over the numbers, lawmakers, governor's staffers and NCAE officials say it's understandable that teachers are confused and have doubts about exactly what they should be expecting in terms of salary this year.

As for Pettey, she said it feels like policymakers are trying to mislead the public and teachers, especially those who have stuck with North Carolina's public system through lean times.

"I don't feel like they value the time that I've given," she said, adding that she's beginning to have doubts about how long she'll stay in the classroom. "I look at my future and think, 'Can I keep doing this much longer?'"