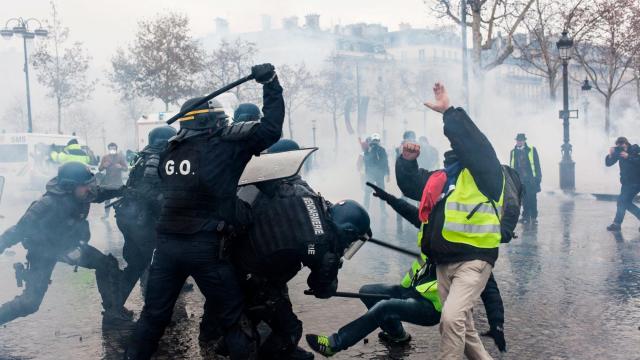 According to CNN affiliate BFMTV, Prime Minister Edouard Philippe will announce a moratorium Tuesday on fuel price hikes, which had been scheduled to come into effect on January 1.

The rising cost of gasoline and diesel fuel sparked protests that have since evolved into broader demonstrations against Macron's government, exposing tensions between the metropolitan elite and rural poor.

The protesters, known as the "gilets jaunes," take their name from the high-visibility yellow vests that drivers are required to keep in their vehicles for safety reasons.

Macron had asked political leaders to meet the protest organizers this week. Two protesters who claim to lead the group, Benjamin Cauchy and Jacqueline Moreau, have however pulled out of a meeting with Prime Minister Philippe planned for Tuesday, according to the movement's spokesman, Maxime Nicole.

Philippe canceled a trip to the COP24 climate conference in Poland to address the issue, which had threatened to flare again this coming weekend.

The government is likely hoping the suspension of the fuel hikes will take some heat out of the protests, which brought an estimated 36,000 people onto the streets of France on Saturday alone.

Around 400 people were arrested after a violent minority turned on police, throwing projectiles and vandalizing statues.

The city's famed Arc de Triomphe was scrawled with slogans in support of the yellow vest movement and others criticizing Macron as the President "of the rich."

Paris prosecutor Remy Heitz said that among the protesters were people from across the country who had descended upon Paris with the express intent of causing trouble.

He added that authorities would crack down hardest on those who had joined the street demonstrations explicitly to carry out violent acts.

"There are varied profiles but there are definitely profiles of people who have come from the provinces all over France, obviously to carry out acts of violence, and it is to these people that the criminal response I will say will be the strongest."

How the 'Yellow Vests' formed

Protesters reacted by taking to the streets of Paris, setting fire to tires -- even cars, in some instances -- for two weekends in a row. Violence has left at least two people dead and more than 600 people injured. Protesters struck some of the wealthiest parts of the French capital, looting luxury shops and smashing bank windows. Police have arrested hundreds.

The "gilets jaunes" may have begun with motorists protesting the tax rise, but it has since mushroomed into a movement against the reformist policies of Macron, thrusting the most severe political crisis on the 40-year-old leader since he took office 19 months ago.

The "gilets jaunes" is a grassroots movement that emerged online with Facebook events set up by regular citizens to coordinate road blockades across France.

The movement has no ties to the big French trade unions that usually organize large-scale protests in the country, nor does it have formal spokespeople. Some protesters say that Cauchy and Moreau, who have spoken on behalf of the group, are not their legitimate leaders.

The group mirrors Macron's own rise to power, which began with the creation of his own grassroots movement, "En Marche!" ("On the move!"), and no backing by the big established parties. Macron said he was neither from the left nor right, just that he was "for France" and branded himself as a man of the people. Macron campaigned on promises to radically change France and his ideas were published in a book he wrote called "Revolution."

But the wave of support that brought Macron to power has waned, with the young leader's approval rating dropping to 25% in November. And public support for the movement is high -- a Harris poll conducted after Saturday's protest suggests that almost three-quarters of French people support it.

Macron is just the latest of many French leaders who have lost support for trying to transform France into a friendlier nation for doing business. His slashing of the wealth tax, for example, was unpopular and triggered criticism that he works for the elite and condescends to the poor.

Many at the protests in Paris came in from rural areas and say they are struggling to make ends meet. Maxime Nicolle, 31, who was at a protest Saturday, is from a rural part of Brittany, and has been a member of the "gilets jaunes" since its creation in November.

He said his family of three struggles to survive on €1,500 a month. "It's really about inequality and how the wealth is distributed. It's a battle between the financial system and the population," he told CNN.

Hugo Melchior, from a wealthy neighborhood in Rennes, northwest France, doesn't even own a car, yet he supports the movement.

"We are dealing with a convergence of anger, frustration, exasperation and weariness that's been suppressed for too long. And they now have this immense power, they find themselves able to act together at a local level against a common enemy -- the state power personified by President Emmanuel Macron, who incites hatred because of his endless arrogance."