Parents of Raleigh teen who nearly drowned in rip current: 'We will do what it takes to keep her with us'

Greenville, N.C. — A spring break trip to the coast has turned into a nightmare for a Raleigh couple, who say their 17-year-old daughter will never fully recover after nearly drowning in a rip current last week.

Paige Merical headed down to Emerald Isle on Friday to spend the day with her friend and Wake Forest High School classmate, Ian Lewis, whose family had rented a house there.

She texted her parents when she got to the coast, and about an hour later, her phone called the Merical home, her father, John, recalled on Tuesday. He said his wife, Suzi, answered the phone.

Paige had been caught in a rip current, and first responders said she had been underwater for 14 minutes. 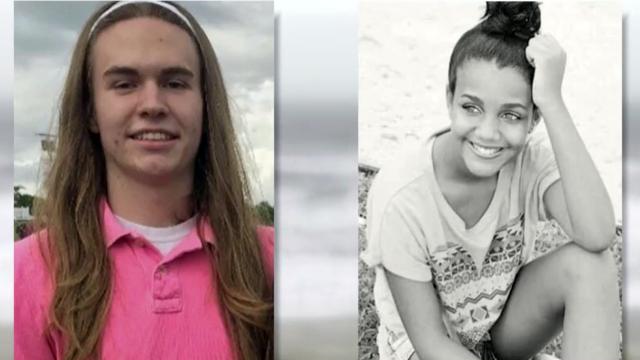 The Mericals rushed to Vidant Medical Center in Greenville, where Paige was taken. She remains in the intensive care unit in critical condition.

"At the same time, we're grieving over Ian. Here's her buddy who she used to take home from school every day, and they haven't found him," John Merical said.

Lewis, 18, got swept off in the same rip current, and his body wasn't found until it washed ashore Monday.

"Hopefully, this whole thing, this nightmare with Ian and Paige might save a few lives of people, making them more aware of not just jumping into the water," John Merical said.

Numerous rip current deaths are reported each year in North Carolina during beach season. Between 2000 and 2017, rip currents killed more people in North and South Carolina than flooding, tornadoes and lightning combined.

John and Suzi Merical – "Our last name is 'miracle.' It's spelled a little different," he said – adopted their own little miracle on the day she was born in July 2001. Paige answered a prayer for Suzi, who couldn't have children.

As she lies in an ICU bed, Paige, a standout athlete, spent many hours breathing on her own, with the respirator turned off. But her parents know their miracle has suffered too much brain damage and is unlikely to make a miraculous recovery.

"We will do what it takes to keep her with us," John Merical said. "My philosophy in this whole thing is something is better than nothing, and we will give her the best life possible. But at some point, if there's an issue, then we'll say goodbye. It's not time to say goodbye yet."

Paige was placed back on a respirator Tuesday afternoon, and the Mericals, who said they have been overwhelmed by support asked for more prayers for her. Wake Forest High students organized a Tuesday evening vigil for their two classmates at Joyner Park in Wake Forest to do just that.

On Tuesday night, as the community mourned, loved ones honored Merical and Lewis at a vigil.

"It means so much because it shows how much everyone cares for him," said David Demattos, one of Lewis' friends.

Merical and Lewis are two teenagers with a family too large to measure.

"Family doesn't have to be blood, it's just people who love each other and support each other, no matter what," said Rachael Osteen.

"It hits pretty hard because we all go to the same school and we all know each other and we're part of the daily routine," Taylor Duncan said.

"Ian would probably be texting me right now if he was here. He'd say, 'Dude, look how popular I am,'" he joked.

As dusk fell, candles were lit, symbolizing the light Lewis spread everywhere he went. His sister, Hanna, believes the memorial confirms everything she thought of her brother.

"...we can take comfort in knowing that he was loved, and loved a lot," she said.